August 22, 2012
The Boneshaker by Kate Milford has been on my TBR for a while now. I have been eager to read her writing, having heard so many good things about it. When her newest book, The Broken Lands, which is a prequel to Boneshaker, became available on NetGalley I requested it immediately. It's no secret I love historical fantasy and this is historical fantasy set in Industrial New York, just as the construction of the Brooklyn Bridge is coming to an end. 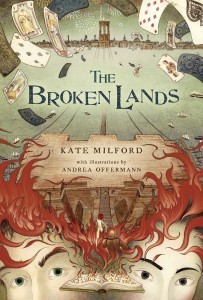 A crossroads can be a place of great power. So begins this deliciously spine-tingling prequel to Kate Milford’s The Boneshaker, set in the colorful world of nineteenth-century Coney Island and New York City. Few crossroads compare to the one being formed by the Brooklyn Bridge and the East River, and as the bridge’s construction progresses, forces of unimaginable evil seek to bend that power to their advantage. Only two orphans with unusual skills stand in their way. Can the teenagers Sam, a card sharp, and Jin, a fireworks expert, stop them before it’s too late? Here is a richly textured, slow-burning thriller about friendship, courage, and the age-old fight between good and evil.

There are a lot of characters introduced in the first few chapters, but Sam and Jin are by far the most important, and the ones I became the most attached to over the course of the story. Sam is a card sharp and trickster who makes his living fleecing others. He is not terribly proud of this, and has a definite desire to do more with his life. Jin is a Chinese girl and a master pyrotechnic. She can create marvels with fireworks. Her past is a nightmare that she is still trying to overcome. She was brought to San Fransisco as a toddler, her feet were bound, and she was raised  for one purpose only. Milford did an excellent job of conveying the exact nature of Jin's terrible past without describing it at all. Those who know of what she is talking about will understand what happened to her. For those who are maybe younger and without as much knowledge, it will go right over their heads. I appreciate this ability to convey what needs to be conveyed without the lurid details. My heart ached for both Sam and Jin as their relationship unfolded amidst the awful situation they were facing. There were some truly beautiful scenes with these two depicting their evolving relationship that stood in stark contrast to the horror of their circumstances. Through both Sam and Jin and their newfound compatriots we are given a glimpse of what people can do when they band together to stand for something greater than themselves.

Milford brings 19th century Coney Island to life perfectly. The story has a definite sense of place. Her prose is vivid and descriptive and she glosses over nothing. Through the characters and plot of the story she shows both the humanity at its finest and inhumanity at its foulest. The plot is fast paced and gets off to a quick start. The bodies start piling up soon and characters find themselves in peril within the first few pages. It is exciting reading for sure, and near impossible to put down. In fact, I didn't put it down until I had finished it. The fantastical elements of the story have a Gothic creepiness to them that works perfectly with the setting. Eastern mysticism is mixed with Faustian legend and the old Jack Tales (one in particular) to make for a unique story. I love that Milford took such rich source material and truly made it her own.

This is a book that straddles the MG/YA genres. I can see older more savvy Middle Grade readers liking and understanding it. It is complex, creepy, and Jin's back story is one that requires some understanding of the world to access fully. I would recommend this to anyone in their early teens or older who enjoys thrilling creepy stories with a lot of adventure. After reading this I'm definitely interested in reading more by Kate Milford.

Note on Content (For my fellow Christian parents.): There is quite a bit of eastern mysticism used in the story. This is definitely a story of good vs evil where the good triumphs, yet while there are definite supernatural forces of evil the supernatural forces for good are not as easily distinguishable. It should make an excellent opportunity for a discussion comparing belief systems and worldviews if  your kids want to read it.

I read a galley of this made available via NetGalley. The Broken Lands is on sale September 4.