October 01, 2011
Cinda Williams Chima's Seven Realms Series has been getting a lot of buzz recently due to the release of the third volume The Gray Wolf Throne, so I decided (with some encouragement from a reliable source) that maybe it was about time I read the first volume, The Demon King. This has everything a high fantasy novel should have Wizards, mountain clans that breed Warriors, a looming Peril, characters with hidden destinies, a ragamuffin type hero. It is predictable but well written. If you are a fan of High Fantasy with a good dose of court intrigue (I am) and enjoy books with well written characters and intricate plots (I do) then you may want to give this series a try. 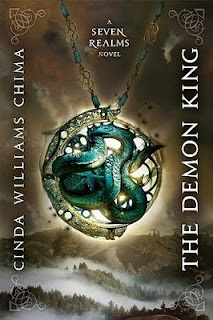 Summary (from Goodreads):
This novel marks the first giant step in a momentous fantasy journey orchestrated by Cinda Williams Chima, the author of the popular Warrior Heir series. Its two chief protagonists are ex-thief Han Alister, an impoverished commoner, and Raisa ana'Marianna, the headstrong Princess Heir of the Fells. The Demon King brings them together, creating part of a volatile mix of action, magic, and danger. Empathetic characters; wizardly attacks.

I found Hans to be a sympathetic and likable character from the beginning. Even when he is getting himself into trouble (this happens a lot) I couldn't help but understand why he makes the choices he does. I was behind him 100% from the beginning. Raisa on the other hand...There was a lot I liked about her character too, like her determination and strong sense of duty. She makes a lot of decisions that land her in trouble as well and I was less sympathetic as I felt that many of them were due to her own pig headedness and refusal to see what was in front of her. By the end I was more content with the direction she was taking.

There are a lot of secondary characters in this novel. A lot. A lot. A lot. It is an epic fantasy.  Sometimes they blended together for me but a few of them are memorable. The villains behave in stereotypical ways yet show signs of having some depth other than pure evil. In addition to Hans and Raisa there are characters that stand out and are developed fully. I refuse to grow attached to any of them though because many of them have TRAGIC stamped on their foreheads already. Things will not go well for them. I am not entirely convinced things will go well for anyone. It made me feel rather removed from the story. If you like neat and tidy this might be a series you want to avoid.

I do have some quibbles. I feel like I am saying this a lot lately, but the book is too long. (I am saying it a lot lately because I think it has become a trend for authors to inflate their stories.) Epic fantasy is notoriously long and detailed (see The Lord of the Rings) but really it is not always necessary. In fact, I think it is usually not necessary. I prefer it when authors can convey worlds with few words and not all authors can do that. I did feel that there were some scenes that could have been shorter or removed completely. I found myself occasionally bored and skimming some parts.

This is a good book to get if you love the genre and are looking for something new that comfortably fits your taste. I will be reading the next volume The Exiled Queen as soon as my library can get it to me.

Chachic said…
Hmm I'm glad you decided to review this, I've been curious about it because of all the buzz in the blogosphere. It looks like something that I'd enjoy reading but probably not fall in love with. I feel like I don't have to get to it as soon as I can. Maybe even find a way to borrow it from someone instead of buying my own copy?
October 2, 2011 at 3:47 AM

Brandy said…
You probably would enjoy it, and maybe even love it (many people do). Personally if someone asked me for a recommendation of YA fantasy with magic, peril and intrigue I would say Melina Marchetta's Finnikin of the Rock or Hilari Bell's Farsala books before this one.
October 2, 2011 at 2:47 PM

Chachic said…
I rarely fall in love with YA fantasy novels that come highly recommended, I don't know why. That happened with Chime, Silver Phoenix and The City in the Lake. It makes me sad when that happens because I go into a book hoping that it would be really good. But I guess it's all good if I enjoy reading it even if I don't love it.

Oooh Melina Marchetta! I keep meaning to read Finnikin especially now that Froi will be released. I've only read Marchetta's contemporary novels (which I loved) but I'm really curious about her fantasy ones.
October 2, 2011 at 9:51 PM