August 08, 2012
I really enjoy Tom Angleberger's Origami Yoda books (reviews here and here). That being the case, he is now an author whose books I'm on the lookout for. I was fairly excited when my library attained copies of Horton Halfpott or The Fiendish Mystery of Smugwick Manor or The Loosenin og M'Lady Luttertuck's Corset. It is written by Tom Angleberger and involves life at an English manor house. 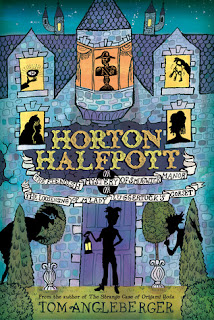 Synopsis (from book's first page):
There are so many exciting things in this book-a Stolen Diamond, snooping stable boys, a famous detective, the disappearance of a Valuable Wig, love, pickle eclairs, unbridled Evil, and the Black Deeds of the Shipless Pirates-that it really does seem a shame to begin with ladies underwear.
But the underwear, you see, is the reason that all those Unprecedented Marvels happened-with the possible exception of the pickle eclairs.

And yes, the book is about all those things, but most importantly it is about a boy named Horton Halfpott.  Horton is a downtrodden servant. His family was once more affluent, but they have been brought low by his father's illness. So he is a kitchen boy. A good, upright, honorable and true kitchen boy who develops an affection for a girl beyond his means he knows he can never have. He is positively Dickensian. In fact, this book reads as a Dickens novel might if it were written by...well, Tom Angleberger. (Whose head, I'm convinced, would be a most fascinating one to peek into.)

The story has one of those plots that pops around a lot showing what several people are up to all at once, not leaving room for much character development. There is quite a bit of the zany and ridiculous.  It mostly works because of Angleberger's talent for wording delightful sentences and because it's so understatedly satirical. That is going go go way over the heads of the target audience, who will most likely enjoy it for it's aforementioned zaniness. There is plenty of hijinks and action to keep readers, even ones who would never deign to pick up a book set at an English manor house under normal circumstances, interested.