November 20, 2015
I will be honest. I've been reading a lot of depressing MG books lately. They are all about the same things and the plots are starting to run together in my head. And then I read Dream On, Amber by Emma Shevah, and it was like a ray of sunshine burst into my world. 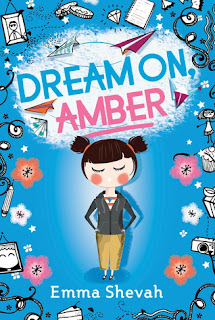 Ambra Alessandra Leola Kimiko Miyamota has many problems, not the least of which is the terrible name her Italian mother and Japanese father saddled her with. To make things easy on herself she goes by Amber. But she can't hide how short she is and is tired of telling people yes she is really 11. She can't hide her mixed heritage either, and is tired of the questions and people asking her to say something in Japanese. (Her standard response is "sushi"). She hates that she has a boring old flip phone that doesn't even have a camera or connect to the Internet. How uncool does her mom want her to be? Most of all she hates having the hole in her life caused by her father leaving them. When her little sister, Bella, realizes she is missing out on a dad and tries to write him a letter, Amber responds creating a dad in her head to help her through her problems and make both her and Bella a little more content.

Amber's voice is so perfect. It has the exact right combination of snark and vulnerability you hear from 11 year olds. She is smart, but common sense often escapes her. She can be judgmental and impulsive and brave and scared.  She is incredibly real and just jumps off the page. Amber's relationship with Bella is beautifully depicted too. They squabble and fight like any pair of siblings, but there is a deep devotion and caring underpinning their relationship that comes out in their every interaction-even the sniping ones. Bella herself is a fully realized character which is not something we see a lot in the younger siblings in MG fiction. I appreciated how the author wrote how the girls feel something is missing with their father being gone, but simultaneously showed how great a family they have anyway. They are missing something and it needs to be acknowledged that it's okay to mourn the absence of someone you think should be there for you. The family unit in the book is a strong one though. The girls have a fantastic mother, a doting grandmother, and they have each other. I am sucker for sibling stories, especially ones about sisters, so this book was a perfect fit for me.

The book has several elements going on to form the plot. There are Amber's letters to Bella, Amber starting at the upper school and not having many friends, a situation with a bully, and an art competition Amber is being forced to enter. It is a lot, but at the same time it's not, because this is Amber's story. It is about her life and these are all little pieces of who she is at the time we are glimpsing into her life. All of it works to make her voice stronger and her character more rounded. I liked the way it all came together in the end too and how much Amber grew as a person.

My one major complaint about the book is not a flaw in the writing, but in the editing and a decision made by the publisher to Americanize the language. STOP DOING THIS, PUBLISHERS. Kids are smart and British English is not going to throw them into massive confusion especially if your already dropping in Italian occasionally. Context is everyone's friend. This could have been a five star read for me, but that was a major distraction. (Though it's a testament to how much I like Amber's voice that I like the book as much as I do. I usually DNF books that do that.)

Some favorite quotes:
She was nice and everything but I wasn't sure I could ever be proper friends with her because her bag was pink and so was her pencil case. I know that's really shallow and everything, but she also had a button saying "I heart Justin Bieber" on her coat, and I really don't heart him at all, so our friendship was never going to be massively deep and special. (p37)

She smiled at me with pity and confusion an went back to the conversation, so I just stared out of the window and in my head, I drew the world as it should be.
For a while it made me feel better.
But then I got to school. (p100)

Both of these highlight Amber's loneliness, but also capture the varied aspect's of her personality. I really like that part about drawing the world as it should be. Amber is an introvert and that's what we introverts do in our heads. All. The. Time. And it does make you feel better. But then reality happens.

I am now handing this one over to my own 11 year old who loves art and snark as much as Amber does. (And also does NOT heart Justin Bieber.)