May 20, 2020
Frances Hardinge is an auto buy author for me. However, I enjoy most of her books more on an intellectual level. There have thus far only been two that I have felt a deep full connection to as a reader, A Face Like Glass and The Lost Conspiracy. Now there are three. Hardinge's most recent release Deeplight falls into the same category-intellectually and emotionally satisfying with prose that makes my mind sing. 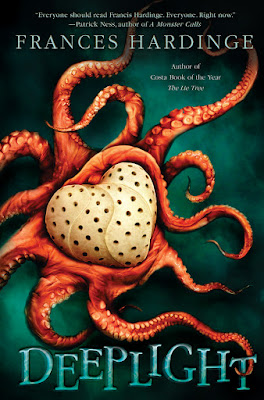 Just 50 years ago the people of the Myriad lived lives of fear. They lived in fear of the monstrous sea gods that would occasionally rise from the sea and swallow whole islands of people. Everything changed with the Cataclysm. The gods turned and destroyed each other, and the Myriad learned what peace was. Now enterprising exhibitions dive under the sea to recover pieces of old god to harvest the powerful godware that still carries a range of powers. On the island of Lady's Crave, Hark is an orphan who must use his wits and cunning to survive. His greatest talent is his ability to tell stories. He knows how to pick a mark, capture their attention, and spin a yarn that will have them believing all he has to say. Complementary to  this, he has an often suppressed passion for other people's stories, including those of the fallen gods. It's often suppressed because Hark lives a harsh live where dreamers are not appreciated, and his closest friend Jelt is always quick to tell him his penchant makes him soft. When a job Jelt drags him into goes wrong, Hark has an opportunity for a new life where he is immersed in stories of the gods. However, Hark's life is not own. His loyalty to Jelt, his promises to his new masters, and his own desire for his life begin to collide. As Hark makes decisions that send him down increasingly blind and terrifying paths, he must decide who he truly is, who he wants to become, and the people in his life who truly matter.

I'm glad we're free even if we do stupid things with the freedom sometimes. Maybe sometimes there isn't a right thing to do. Maybe there's just lots of wrong answers, and you have to pick one you can bear-something that doesn't break who you are.

Boy, do I love Hark. For about half of the book he is allowing things to happen to him. He's proactive when he is forced to be, but he is also easily influenced. Part of this is due to fear and part of it is simply not having enough freedom to ask questions about what he actually wants out of life. His circumstances have made those choices for him. The one thing he knows for sure is that crew is family, which makes Jelt his family no matter how uneasy he increasingly becomes over their continued relationship. As a reader, it is easy to see Jelt is obviously dangerous, and their relationship is not a healthy one. I felt every bit of Hark's desperation to break free because I wanted him to so badly. Hardinge makes the reader feel for him in every way possible. Through his newly acquired job tending to the old and dying priesthood, Hark learns many truths about himself and the world. He figures out what passions and opinions are truly his own. Every part of his character arc and growth is worth the price of this book. Then it goes and gets even better by adding Selphin and Quest.

Selphin is a sea-kissed girl who is the daughter of the most infamous smuggling queen in the Myriad. The sea-kissed people are held in high regard due to losing their hearing in diving accidents or from prolonged exposure to the depths. It's considered a mark of bravery and distinction. Selphin is definitely brave, but she is also pragmatic and determined. No one is going to put her in the ocean again despite what her mother thinks. Selphin and Hark go from being hostile acquaintances to reluctant allies to true friends as the story progresses. Sephin is an amazing character and just as important as Hark to the story in every way. She is the perfect foil for him-unafraid to speak the truth no matter the pushback, incapable of being manipulated, firm and strong in exactly who she is. Watching their friendship develop was heart-warming.

Quest is one of the old priests who inhabits The Sanctuary where Hark's new opportunity takes him. It is part of Hark's job to care for and listen to the priests as they tell their stories. Quest is the priest who is most cognizant to events as they are in the world around him. He is cunning and manipulative in his own way and has a respect for Hark's sharp mind and ability to take things in. Through Quest, Hark learns more about his beloved gods. He discovers they were more terrifying and monstrous than most in living memory even know. Quest is also key to the unfolding plot as he acts a mentor for Hark in some respects but also as a catalyst for most of Hark's choices and his ability to figure out who he wants to be in the last third of the book. This wise, flawed, and courageous old man has my whole heart.

It is well documented that I love a good character driven story, and Deeplight is definitely that. It's not just one but THREE excellent character stories. In addition to that, it is also full of other things I love. It's mythopoeic, and the history and complexities of the sea gods are exactly the type I'm looking for in mythopoeic fiction. There is also a fair bit of political intrigue and and maneuvering in various threads of the plot that are both exciting and intriguing. There is a complexity to the politics of smuggling gangs, governments, and secret cults alike,  and things get twisty when their interests collide. The world-building of the Myriad is so thorough that it exists now in my head as a place I want to visit. The way Hardinge uses it to subtly touch on themes of prejudice and persecution is equally fascinating.

Then there is the book's core theme of knowing who you are and what that means to you. How much of yourself belongs to you and how much do you owe to others? Which others are most important-your crew, your master, or society in general? What are you willing to sacrifice of yourself and your principles if asked? What are you willing to sacrifice if you simply see the need for it? These are deeply philosophical questions that often don't have straightforward, simple answers. Hardinge uses Hark, Selphin, and Quest's journeys to explore them in a way that is deeply meaningful and engaging.

I recommend this book to anyone who loves myth, thinking of difficult questions, and in-depth character journeys.

Jenna @ Falling Letters said…
Ahh, I've read so many great reviews of this book, I hope I can get a copy soon! I have been wondering what I would think of the boy protagonist, as both of the Hardinge novels I've enjoyed had girl protagonists. So I'm glad to read he struck a good chord with you.
May 20, 2020 at 3:48 PM

Brandy said…
Until you mentioned it, I didn't even think of how the male protagonist is a change for a Hardinge novel! It worked really well for me. Like all the best of Hardinge's novels, there are several excellent characters who are given a lot of page time and development.