October 14, 2013
I really enjoy Rainbow Rowell's writing, from her adult novel Attachments to her YA Eleanor & Park. I just love the way she paints pictures with words and creates characters who are real and easy to relate to. For all those reasons plus its amazing synopsis I was so excited to read Fangirl. 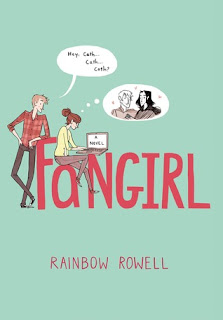 Cath is a Simon Snow fan.
Okay, the whole world is a Simon Snow fan . . .
But for Cath, being a fan is her life — and she’s really good at it. She and her twin sister, Wren, ensconced themselves in the Simon Snow series when they were just kids; it’s what got them through their mother leaving.
Reading. Rereading. Hanging out in Simon Snow forums, writing Simon Snow fan fiction, dressing up like the characters for every movie premiere.
Cath’s sister has mostly grown away from fandom, but Cath can’t let go. She doesn’t want to.
Now that they’re going to college, Wren has told Cath she doesn’t want to be roommates. Cath is on her own, completely outside of her comfort zone. She’s got a surly roommate with a charming, always-around boyfriend, a fiction-writing professor who thinks fan fiction is the end of the civilized world, a handsome classmate who only wants to talk about words . . . And she can’t stop worrying about her dad, who’s loving and fragile and has never really been alone.
For Cath, the question is: Can she do this?
Can she make it without Wren holding her hand? Is she ready to start living her own life? Writing her own stories?
And does she even want to move on if it means leaving Simon Snow behind?

I LOVE Cath. And man could I relate to her. I am a fangirl. I find it far too easy to get sucked into obsessions that have nothing to do with the real world. I completely understood her dedication to her world. I also understood her anxieties and need for space and time for herself. Many readers may find it odd that she avoided the cafeteria at college for so long simply because she didn't know how it worked and didn't want to ask anyone. I got that. In fact so much of Cath's freshman year is equivalent to mine it is scary. I adored this aspect of the book. That here was a deeply introverted character and she isn't presented as weird or strange. She is who she is. She has issues to deal with sure and a lot of room for growth, but her personality was not the problem and wasn't made to be. I also loved the boy. Every little bit of him, their interactions, and the development of their relationship (and that's all I'll say about that).

Rowell's writing style is superb as always, woven with sarcastic humor, deep emotion, and the wonderful way she has of bringing her world to life.

I do feel like there was a little too much going on and as a result not all of it was developed as well as it could be. There were a lot of threads in the story: Cath's writing, the pressure she feels over her writing, her relationship with her manic father, her relationship with her sister (who has a drinking problem), her non-relationship with her estranged mother, the boys. And all of this is interspersed with Cath's own fanfiction writing (which I will admit I skipped a lot of). I think I would have connected to the story more if this had been pared down. Still. It is a fun and engrossing read. Rowell is one of my auto-buy authors now.

Unknown said…
I do agree, I skipped a lot of the fanfiction, I just wanted to get to the story. And there were some areas that could have been developed more, but I really did love this book :) great review, Brandy!
October 16, 2013 at 1:22 PM

Brandy said…
I did too. I really did, but I know Rowell can do better plot construction than this too so I was really torn while reading it.
October 16, 2013 at 3:08 PM