February 22, 2014
Last year I read the first book in Mindee Arnett's Arkwell Academy series, The Nightmare Affair (my thoughts), and I fell in love with the fun premise and combination of mystery and fantasy. I was so excited to read the second volume,  The Nightmare Dilemma, and I wasn't disappointed. These books are so much fun.

(This is a review of an ARC received from publisher in exchange for a fair review.) 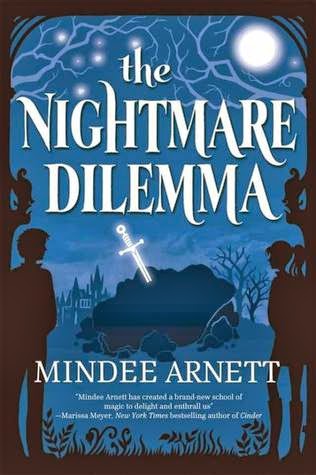 Dusty Everhart might be able to predict the future through the dreams of her crush, Eli Booker, but that doesn’t make her life even remotely easy. When one of her mermaid friends is viciously assaulted and left for dead, and the school’s jokester, Lance Rathbone, is accused of the crime, Dusty’s as shocked as everybody else. Lance needs Dusty to prove his innocence by finding the real attacker, but that’s easier asked than done. Eli’s dreams are no help, more nightmares than prophecies. To make matters worse, Dusty’s ex-boyfriend has just been acquitted of conspiracy and is now back at school, reminding Dusty of why she fell for him in the first place. The Magi Senate needs Dusty to get close to him, to discover his real motives. But this order infuriates Eli, who has started his own campaign for Dusty’s heart.As Dusty takes on both cases, she begins to suspect they’re connected to something bigger. And there’s something very wrong with Eli’s dreams, signs that point to a darker plot than they could have ever imagined.

The story opens with Dusty being called to dream feed on a fellow student who has been gravely injured. While breaking the Will was the right thing for Dusty to do at the time, it has created a chaotic atmosphere at the school and in the wider magical world. Kinds are attacking each other and violence abounds. Dusty and Eli are asked to use their dream sessions to figure out who is behind this violent attack. The mystery in this novel is not about figuring out who is behind the attacks, but figuring out what is going wrong in Dusty and Eli's sessions and why Dusty is having a recurring dream herself about a mysterious plinth with a word she feels compelled to discover. There's a lot going on in the story as Dusty and Eli's evolving (or not as evolving as she would like) relationship is a major issue as well. Despite the number of pieces in the story, Arnett fit them together well and perfectly. I never felt that it was too much or that anything was left undone. The villains in the piece are not surprising, but they are not intended to be either. This is a mystery of how/why, not who, and there are some surprises regarding Dusty and Eli's dream seer relationship that are surprising. The entire book is a page turner, and every page is a joy to read. I simply adore the combination of mystery and fantasy that Arnett has in these books.

The characters are another aspect that will keep returning to this series. Dusty continues to be impulsive, rash, and heedless of danger though she is working on all three of these. Her intelligence and bravery shine through as well. Eli is a perfect foil for her in every way, and I adore the way they balance each other and work together as a team. Also Eli is just a pretty amazing guy. The further development of Selene, Lance, and Paul worked really well in this story too and I also liked how the adults were shown to have more sided and nuances.

The romance is something else that makes these fun. Dusty and Eli are more than just a great dream seer/crime fighting team. They have great chemistry too. The interaction between them is far more angsty in this book than the first though. For a long time their relationship remains undefined and that is frustrating to Dusty (and me!), but soon a secret is revealed that shakes the whole thing up. I sort of could  have done with out that. It ratchets the angst factor through the ceiling and I have a feeling will be the central focus of at least the next book, if not more. I can see the point behind it though, and am interested to see where Arnett takes it. I will go along with her for the ride, but honestly I wouldn't mind if these books were just Dusty and Eli solving crimes and occasionally making out in their free time. But I am not a member of the target audience either. I think they will eat this up.

I am definitely in this series for the duration. I'm already eagerly awaiting the third installment.

I received an ARC via the publisher, Tor Teen. The Nightmare Dilemma is available for purchase on March 4.