A Pocket Full of Murder

August 24, 2015
R.J. Anderson is one of my favorite authors. Being a voracious reader, I have a lot of authors I really like, but she is included in a special group of authors whose books I would scoop up in my arms if I was escaping my house in a disaster. They are all excellent and stand up to multiple rereads. Anderson has written books about (awesome) faerys and amazing girls in a mind boggling sci-fi duology. Her latest book, A Pocket Full of Murder,  is a MG magical murder mystery and it is a perfect book for me in every way possible. 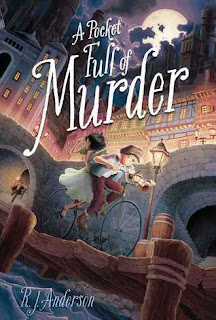 Isaveth's family has fallen on hard times since her mother's recent death. Her father, a builder, lost a major job he was counting on and has fallen into despair. Her sister had to quit school to get a job in a sweatshop factory. Just when things begin to look better for the family and her father's commission is restored, a worse tragedy befalls them. When the man who had fired then rehired Isaveth's father is found dead by means of Common Magic, Isaveth's father is arrested. Isaveth knows her father is innocent, but she's not sure how to go about proving it. As she begins to investigate, she is joined by a street boy with an eye patch named Quiz who has eyes and ears all over the city and a knack for getting at information. Together they begin to try and discover the real murderer in a case that has too many suspects and disastrous consequences for both of them if they fail.

GAHHHHHH!!!!! I don't really know where I want to start with this. I have so much love for every part of this book, and my brain just keeps doing cartwheels and squealing LOVE LOVE LOVE. Trying to calm it down and act rationally is a challenge. I even waited a few days after finishing to give myself space so I could write this. But as soon as I started thinking about the book again, I got a rush of endorphins and lost control of my critical thinking skills. I will start with what I always love most, the characters, and hope my brain calms enough to cooperate.

Isaveth is smart, courageous, and stubborn. When her family is having hard times, she pulls down her mother's book of magic recipes and concocts spells to sell on the street to give them a little extra money. She has a passionate love for dramatic crystal set (radio) shows and writes fanfiction for it on any scrap of paper she can get  her hands on. She is perfecting her craft. Her imagination is vast and she's bursting with twelve year old idealism mixed with the harsh realities of the life she is living. She is desperate to free her father, and her headlong rush into investigating the crime causes her to stumble into unfortunate situations at times and make rash judgements and mistakes. This includes not listening to Quiz on the occasions when he tells her to slow down and think something through.

Quiz is no stranger to dashing into dangerous situations without thinking them through first himself though. He is also a bit of an adrenaline junkie who rides down hills at breakneck speeds and is prone to getting into sticky situations in defense of those who need defending. He is adorably awkward around Isaveth at times. When he's interacting with her sisters you can see how badly he longs for a regular family and normalcy. Together Isaveth and Quiz make a fantastic team. He can go places and get information she can't, and vice-versa. He is there to give her rides when she needs them and generally back her up when she's in a tough spot. And when the tables are turned and he is in the tough spot, she does the same for him. I have all these FEELINGS for both of them, separate and together. Feelings I will never be able to properly put into words.

The mystery is a good old fashioned mystery where there are clues that seem to lead to everywhere or nowhere, lots of suspects, and a few good twists. (Some of which I saw coming due to reasons I imagine will not be the case for the majority of the readers of this book.*) The ways in which Isaveth and Quiz find their information makes sense for the world they live in, and they are reliant on those older than them for crucial things. Isaveth's older sister plays a major part in helping them collect information. The way the mystery all came together in the end was fascinating and the resolution complex and layered, but simple to understand for the intended audience.

The world Anderson created for this book is one where society is split between nobility and those who are not. The nobility has a very specific sort of magic they use to keep the world running smoothly. Common Magic is for those not so privileged and was a hard won ability for the regular people. The city of Tarreton where Isaveth and Quiz live is divided. The common people are tired of being abused, underpaid, and unable to make decisions. Rebellion is whispered of and unrest is high. These political issues are an integral part of the story and woven into the texture of the character's lives perfectly. Religion plays a part in this as well. Isaveth's family are Moshites (very similar to real world Jewish faith) and therefore looked on as outsiders, if not dangerous dissenters. It's part of the reason her father makes such a perfect frame for murder. Anderson presents the religious and political aspects as part of everyday life important in different ways to different people and this makes the world she has built all the more realistic as a result.

I highly recommend this book to all lovers of mystery and fantasy of any age. There is something here to enjoy for everyone. I can not wait until my pre-ordered copy arrives so I can read it again. And so my daughter can read it because this is exactly the sort of book she adores.

*I saw some of the twists coming because I am a fan of the source material that was Anderson's inspiration. A HUGE fan actually. If you are completely unaware of what that source material is or anything about it, you have lots of surprises in store. I'm including this note for those of you who know what inspired this and love it as much as I do. I just want you to know that Anderson did an awesome job with that. It's a nice little treat for those of us who know and love that particular literary detective. (And if you don't know what I'm talking about, but want to, ask in the comments and I'll tell you. Not spoilers. Just what the source material is.)

I read an ARC made available from the publisher, Atheneum Books for Young Readers, via Edelweiss. A Pocket Full of Murder is on sale September 8th.

This book is definitely going to be my reward for getting through the next few weeks. I cannot wait.
August 24, 2015 at 2:22 PM

Kim Aippersbach said…
Why have I not heard of this author?? Ultraviolet sounds really cool (and it's actually in my library!), and you've sold me on this book (which is not even out yet, oh cruel review of an ARC!). Dare I guess that the literary detective you elliptically refer to was played by an actor who also played a dragon?
August 24, 2015 at 2:50 PM

Brandy said…
All of Anderson's books are fantastic and the first three faery books are finally being published in the US with decent covers from Enclave.

AND NO. The detective in question is not the famous Holmes. This detective is less well known but I like him even more. It is Peter Wimsey from Dorothy Sayers' novels and he is the best.
August 26, 2015 at 10:33 PM