September 09, 2013
I actually never read a synopsis for The Real Boy by Anne Ursu. I knew she wrote it and I liked Breadcrumbs (my thoughts) and that was all I needed. When I saw it was available on Edelweiss I immediately requested it and was thrilled to be approved. I had expectations in my head based on the title. And the book was something else entirely. Something wonderful 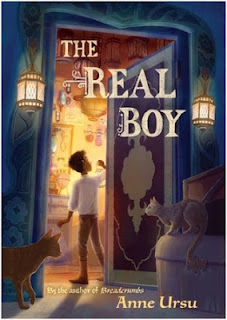 Synopsis (from Goodreads):
On an island at the edge of an immense sea there is a city, a forest, and a boy. The city is called Asteri, a perfect city that was saved by the magic woven into its walls from a devastating plague that swept through the world over a hundred years before. The forest is called the Barrow, a vast wood of ancient trees that encircles the city and feeds the earth with magic. And the boy is called Oscar, a shop boy for the most powerful magician in the Barrow. Oscar spends his days in a small room in the dark cellar of his master's shop grinding herbs and dreaming of the wizards who once lived on the island generations ago. Oscar's world is small, but he likes it that way. The real world is vast, strange, and unpredictable. And Oscar does not quite fit in.
But it's been a long time since anyone who could call himself a wizard walked the world, and now that world is changing. Children in the city are falling ill and something sinister lurks in the forest. Oscar has been content to stay in his small room in the cellar, comforted in the knowledge that the magic that flows from the trees will keep his island safe. Now, even magic may not be enough to save it...

Oscar is a wonderful protagonist, endearing and lovable. He made the mother in  me want to give him a home. (But not hugs and kisses because he wouldn't like that.) Something is different about Oscar, something is not all normal, something's a little off. I don't want to say too much more about that so as not to give spoilers, but I loved what Ursu did with his character. Nicely subversive that is. Callie, who befriends Oscar, is just as enjoyable a character. They make a great team in everything they have to do together.

I realize I'm being incredibly vague. Probably frustratingly so. I will continue to be about the plot as well. It is filled with action, and there is a huge mystery to solve. It is like a roller coaster ride in the dark that switches tracks and drops you down and backwards a few times. I went into it not having a clue what path the track was taking and it was fun that way. Not going to ruin anyone else's experience. Rest assured that Ursu has a firm grip on all the elements of her story and she wields her words perfectly.

So my point? The book is amazing. Read it. Book talk it. Kids will love it.

I had read an e-galley made available to me by the publisher, Walden Pond Press, via Edelweiss. The Real Boy is available for purchase September 24, 2013.