September 26, 2013
I enjoyed The Peculiar by Stephen Bachmann when it came out last year (my review). MG Steampunk is such a rare thing and the world building in this one is so well done. I was eager to read the sequel, The Whatnot, and excited when I received an e-galley. 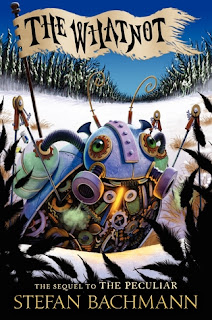 Pikey Thomas doesn’t know how or why he can see the changeling girl. But there she is. Not in the cold, muddy London neighborhood where Pikey lives. Instead, she’s walking through the trees and snow of the enchanted Old Country or, later, racing through an opulent hall. She’s pale and small, and she has branches growing out of her head. Her name
is Henrietta Kettle.
Pikey’s vision, it turns out, is worth something.
Worth something to Hettie’s brother—a brave adventurer named Bartholomew Kettle. Worth something to the nobleman who protects him. And Pikey is not above bartering—Pikey will do almost anything to escape his past; he’ll do almost anything for a life worth living.
The faeries—save for a mysterious sylph and a mischievous cobble faery or two— have been chased out of London. They’ve all gone north. The army is heading north, too. So Pikey and Bartholomew follow, collecting information, piecing together clues, searching for the doorway that will lead them to Hettie.

The world building is again the greatest strength of this novel. Bachmann has created two vivid and separate worlds. In The Peculiar we were concerned mostly with the alternate England. This story flashes between that world and the Old Country, the world of the faerie. In England war has begun between mortals and faerie. Peculiars and fae alike are being rounded up and put in prison. Very few places are safe. In the Old Country the King is working on a plan to take over England and use it for his own purposes. Bachmann built up the King quite a lot. He is whispered of by the faeries in England, who fear him. He is whispered about by the faeries in the Old Country, who fear him. While he is most definitely a to-be-feared-villain, he was a little too predictable to make me worry over him so much. Still, the creatures he controls are frightening. I also enjoy the picture Bachmann paints of the Sidhe. He makes them so perfectly ruthless, uncaring, unpredictable, and changeable.

As the story focuses on two places, it also focuses on two different characters. One is a character familiar from the previous book, Hettie, who is not in the Old Country. Hettie who is far more resourceful and cunning than was seen in the first book. I thoroughly enjoyed her and how she thought out her problems. She was expecting Bartholomew to come rescue her and her goal was to survive in the meantime. That is a high reaching goal for a changeling navigating the world ruled by the Sidhe and evil King bent on destruction. It was interesting seeing her mind work. In England the story focuses on a new character by the name of Pikey. Pikey has endured terrible things at the hands of the faeries and yet he isn't completely repulsed by them. He is a gutter rat and not the sharpest knife in the drawer at times, but he has is a strong sense of honor and a whole lot of courage. As in the first book it was hard for me to connect with the characters because of the shifting perspectives and the newness of Pikey in a plot so full of action. Bartholomew doesn't appear until halfway through the book and Jelliby is barely in it at all. Bartholomew is very much changed but the reader gets no real sense of how this change came about as it is not seen happening. This frustrated me as a reader, but that is because I'm a character reader.

Anyone who has read The Peculiar will want to read the continued adventures of this delightful alternate Victorian world, particularly if you are a reader who enjoys creative world building and fast paced twisting plots.

I read an e-galley provided by the publisher, Greenwillow Books, made available on Edelweiss. The Whatnot is on sale now.