The Boy in the Black Suit

April 06, 2015
The Boy in the Black Suit by Jason Reynolds came out the first week of the year. I heard good things from several people, and was eager to try on of Reynold's books. Boy was I not disappointed. 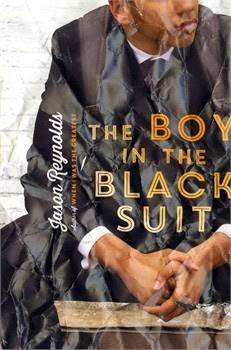 Matt Miller is a boy who wears a black suit to school every day. His mom died of cancer recently, but that's not the reason for the suit. Matt, a senior on an abbreviated schedule due to good grades, works every day at a local funeral home. He arranges flowers, sets up buffets, washes cars, and sometimes acts as pall bearer. He also attends most of the funerals. Sitting in the back, he soaks up every ounce of heart splitting grief he can. Matt has close friends, both old and new, who are there for him though and don't allow him to get swallowed up in his own grief. Friends who will have his back, broaden his horizons, and bring him back, little by little, into the world of the living.

Matt's world shrunk considerably when his mom died. He lost his position at the bank he was supposed to be working at for school. His father started drinking again after years of sobriety. He lost almost all the joy in his life. Matt loves to cook but finds he can't because it reminds him too much of his mom. In the days closest to her death, you can see that he is only hanging on by the barest of threads. As the days and weeks pass, it gets a little easier. His method of coping is a bit odd. He goes to the funerals and focuses on the person who appears closest to the deceased, and then eagerly awaits for the breakdown of grief he knows is coming. Like living vicariously through these grieving people keeps his own close enough that he never forgets what he's lost. Then his father ends up in the hospital and he's living alone. I felt so bad for Matt and worried for him. But I like his progression away from his grief too. He slowly begins to live a little. He hangs out with his best friend, who works hard to keep things as normal as possible between them. Matt's new boss becomes his mentor, sharing the hard times of his own life and giving Matt advice. Then there is Love, a girl Matt meets who brightens his world. She expands it too, dragging Matt into places he's never been and sharing her own pains. Through his relationships with the people around him, Matt takes his steps back into his full self, slightly altered but with a sense of purpose and reason to keep living.

The relationships and community are central aspect of The Boy in the Black Suit, and I found them all equally real, important, and necessary. This book showcases how the people in a person's life can make all the difference in times of crisis. I enjoyed all of the interactions between Matt and the other characters from the playful typical teenage banter he shares with Chris to the deep philosophical discussions with Mr. Ray to the tentatively healing superficial conversations with his dad to the gamut of conversations he has with Love, all of them are important and fit the characters and setting.

The setting of Bed-Stuy is fully realized as well, showcasing a community of diverse people with different motivations, pasts, potential futures, problems, jobs, and lifestyles. I really felt like I was experiencing the streets, restaurants, noises, and hilariously frightening cab drives right along with Matt.

The Boy in the Black Suit is an excellent look at the process of grief and the importance of community.

Anonymous said…
First time I've heard of this title and it seems like a good one. I like that it's about a guy who has an unusual way of dealing with his grief. Also, I love books that have a strong sense of community.
April 7, 2015 at 4:22 AM

Brandy said…
It's a great read for both those things and I really liked Chris, the main characters.
April 7, 2015 at 8:39 PM