May 15, 2014
Jonathan Auxier has a way with words. That was evident with his debut novel, Peter Nimble's Fantastic Eyes, and his latest offering, The Night Gardener, proves it beyond doubt. Atmospheric, mysterious, and chilling, it is a book whose words don't just beg to be read, they demand it.

This is a review of an ARC received by the publisher in exchange for a fair review. 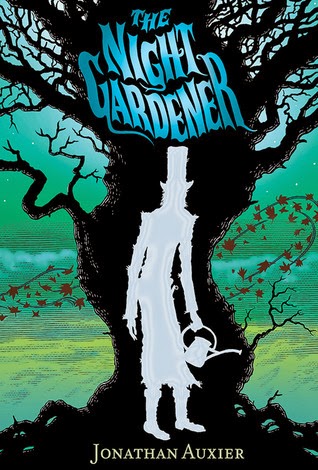 Molly and Kip are recently arrived in England from Ireland. Alone in the world, they seek employment and find it with the Windsor family in an old house in a creepy and disturbing place called the sour woods. Along the way they meet an old storyteller named Hazel who gives them directions and warnings. Arriving at the Windsor family home, they discover a dilapidated house with a massive ugly overgrown tree right up next to it and a mysteriously ill and fading family living inside. As the days pass, Molly and Kip find their new situation to be far more dangerous than they ever imagined. For inside the house at night, a mysterious shadow of a man prowls from room to room and the inhabitants are plagued by nightmares that encapsulate their worst fears. But the house has a mysterious and inexorable pull on those who live there,  so leaving may not be an option.

Molly has a way with words and stories. She weaves her words together to create tales that are almost magical in their power to make others believe her and want to do as she says. Kip is talented with gardening. He loves the plants and tends them well. Together they are an intrepid team telling the type of story I love most, a sibling story. Within the house live another set of siblings, Alistair and Penny. Alistair is an unpleasant gluttonous bully. Penny is a little girl longing for someone to love her, play with her, and tell her stories. Kip and Penny, the younger siblings in each set, are easy to love and root for. As a reader, I felt a desperate need for neither of them to be injured in any way. Kip is hardworking and simply longs to be like other children despite his lame leg. Penny is exuberant and full of life and energy. Watching what the house and its secrets are doing to her is not pleasant. Molly and Alistair, the oldest two, are a bit harder to fully embrace. Alistair is meant to be unpleasant. He is there as a foil, mostly for Molly, who, while likeable, has plenty of flaws. The most serious of which is her inability to separate story telling and lying. She is also exceedingly stubborn and does not want to listen to anyone's counsel but her own. I think she will be relatable to child readers, as will Kip and Penny.

I also really liked how the adults are active and present participants in the story as well. The Windsor parents are even more caught up in the house and its secrets than the children are and are in need of help and rescue. Hazel, the old story teller, is also an important part of the story, and I like how she was there for information and guidance but didn't interfere with what the children were accomplishing.

On one level The Night Gardener is a creepy tale about a mysterious old house and the malevolent force at work inside it.  The plotting and pacing are done just right to pull readers in and keep them in, caught up in the story, on the edge of their seats wondering what is going on. It is exactly the right level of creepy too. Kids who want a book to creep them out and will expect exactly that after looking at the cover, will not be disappointed. As the eerie mysteriousness of the plot unfolds it is Auxier's brilliant use of imagery and the cadence of the writing that holds one spellbound. This would make a superior read aloud, but it is also beautiful read silently. This is not just a creepy story for the sake of having a spine-tingling read though. (Although that's always good fun on its own.) It is a story of family, courage, greed, selfishness, forgiveness, despair, love, hope, and redemption. And justice. (I really liked that element.) And all of that is layered in with the characters and action so seamlessly. The characters live it and the reader sees and feels it. Most of all, it is a story about the power of story and words. Auxier uses each and every one of his carefully to bind the reader to him, just as Molly does with hers. I love this realization Molly comes to at one point: "I think I figured it out. Hester asked me what the difference between a story and a lie was. At the time, I told her a story helps folk. Helps 'em do what? she asked. Well, I think I know the answer. A story helps folks face the world, even when it frightens 'em. And the lie does the opposite. It helps you hide." That is this story in a quote.

I would caution care and knowledge of the reader when giving this to younger kids reading MG books. There is enough darkness and horror to frighten the sensitive, but I think it is exactly the right amount for the majority of MG readers. The amount they long for and need, balanced with a great deal of hope and triumph as well. It is basically everything I love and look for in a book.

I read an ARC received from the publisher, Amulet Books, at ALA Midwinter. The Night Gardener goes on sale May 20th.

Brandy said…
It is CREEPY too. Kids who want and like creepy will not be disappointed. It totally delivers on that.
May 15, 2014 at 9:19 PM