I can hardly believe we are almost halfway through second grade. Four more weeks and we are done with the term. We are well into our study of ancient cultures that is focusing on Ancient Egypt, and these next four weeks find us immersed in the Middle Kingdom. We have been reading Roger Lancelyn Green's Tales of Ancient Egypt to give Bit some background and understanding of the religious system. 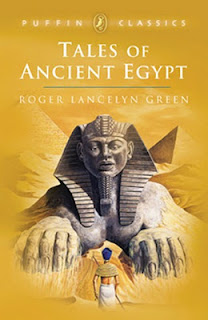 The Story
Tales of Ancient Egypt is a collection of tales and myths from Ancient Egypt. Go figure. The book is divided into three sections: Tales of the Gods, Tales of Magic, and Tales of Adventure.There are 20 tales in all.

Bit's Thoughts
I like Tales of Ancient Egypt because it will help me understand history more. I also like it because I like Egypt. My favorite story was "The Story of the Greek Princess". I like this tale because the people are so clever in it. It is also the story of Troy which I know about from reading The Trojan Horse. This probably isn't going to be my favorite book this year but I think you should read it.

My Thoughts
This is certainly a great resource to have about if you want a book on Egyptian mythology. We are going to be reading several novels in the second term that take place in Ancient Egypt (plus Bit is dying to read the Theodosia books) and I wanted her to have some background knowledge as the religion was extremely important in the life of the people. This book gives you a great basic knowledge of the gods and the system of worship. It is older so the language is rather dry. I wouldn't recommend trying to read it aloud unless you are used to reading lengthy novels aloud or you practice first. It should also be noted that several of the tales, unlike most religious stories, actually reward criminal behavior such as treason, theft, fratricide. It sparked some interesting conversations around here for sure. (And isn't that the whole point of good literature?)

What Bit and I are reading next: Harry Potter and the Prisoner of Azkaban (Oh the excitement that is ensuing.)

Anonymous said…
This comment has been removed by a blog administrator.
April 3, 2012 at 5:58 AM