February 06, 2012
The book with the new shiny medal affixed on its cover, the 2012 Newbery winner.  I had not read it before now because, while I admire author Jack Gantos's talent and versatility, I don't particularly enjoy his work. Just a matter of personal taste. I did enjoy Dead End in Norvelt, not enough to love it, but enough to appreciate it. 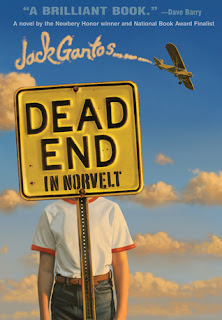 Synopsis (from Goodreads):
Melding the entirely true and the wildly fictional, Dead End in Norvelt is a novel about an incredible two months for a kid named Jack Gantos, whose plans for vacation excitement are shot down when he is "grounded for life" by his feuding parents, and whose nose spews bad blood at every little shock he gets. But plenty of excitement (and shocks) are coming Jack's way once his mom loans him out to help a fiesty old neighbor with a most unusual chore—typewriting obituaries filled with stories about the people who founded his utopian town. As one obituary leads to another, Jack is launched on a strange adventure involving molten wax, Eleanor Roosevelt, twisted promises, a homemade airplane, Girl Scout cookies, a man on a trike, a dancing plague, voices from the past, Hells Angels . . . and possibly murder.

Gantos has the quality I  most admire in writers, that of conveying much with few words. He can convey reams of information about a character with a few well phrased sentences. The characters were the best part of the novel for me, particularly Jack and his parents. Other characters seemed more caricatures than the realized characters of the main family and were quirky to the point of being over the top. Still,  the effect of the whole is charming and amusing for the most part.


As a work of historical fiction this book excels, and I found it to be most deserving of the Scott O'Dell Award it was given for this aspect. Gantos paints a picture of the times with his words and imagery without explicitly going into facts about the 1962 setting. Through all the obituaries Jack is scribing for Miss Volker and his own summaries of the Landmark history books he is reading the reader is treated to several anecdotes of times past. The book is a treasure trove of interesting historical detail, and while the historian in me appreciated this and how events in Jack's present were connected to the past and references to the impact on future events were made, I couldn't help feel most children would not appreciate it as much.


The book is largely anecdotal, one story after another depicting life in the town, life in the past, life in the Gantos home. Until suddenly around page 290 it turns into a murder mystery for about 40 pages. That is where things went from quirky to downright strange for me as the reader. As much as I appreciate Gantos's ability to write interesting characters, I just find his humor to be odd and not really humorous.

While this is not my particular cup of tea, it is well written and interesting and I'm sure will find a happy home in the hearts of many readers.