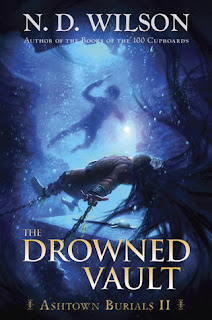 It's been almost a year since Cyrus and Antigone Smith earned their places as Journeymen at Ashtown, home of an ancient order of explorers that has long guarded the world's secrets and treasures. While their studies go well, Cy and Tigs are not well liked since losing the Dragon's Tooth to the nefarious Dr. Phoenix. The Tooth is the only object in the world capable of killing the long-lived transmortals, and Phoenix has been tracking them down one-by-one, and murdering them. The surviving transmortals, led by legendary warrior Gilgamesh of Uruk, descend on Ashtown in force, demanding justice. Cy and Tigs find themselves on the run in a desperate search to locate Phoenix and regain the Tooth. In the process, they uncover an evil even more dangerous than Phoenix, one that has been waiting for centuries to emerge.

In The Drowned Vault Wilson takes the interestingly intricate world he built in The Dragon's Tooth and kicks it into high gear. Or even higher gear as the first book was pretty intense to begin with. The story is an action packed adventure from start to finish. There is a lot going on and a huge cast of characters to keep track of. In addition to the characters we  already know and love (or fear), a whole host of new ones are introduced including Gilgamesh and Arachne. Yes, THE Gilgamesh (as in Epic of) and THE Arachne (as in the myth). There is now not just one super creepy evil villain to deal with, but two. Not to mention the large group of people whose apathy and fear are causing trouble for the heroes. Then there are all the historical references too, which are great fun if you catch them. The genius of Wilson's writing is that he manages to write well developed characters while maintaining a plot that is in hyperdrive. Most writers can do one or the other. It is a rare talent that can do both.

It is about a year since the beginning of Cyrus's journey and he has grown and changed. He grows and changes within the pages of this novel. Toward the end Antigone is concerned that Cyrus is planning to do something dumb, concerned what he might be doing without her there to restrain or talk sense into him. In fact, he is not. The way he handles the trials and choices in this novel shows he has grown in maturity. He learned from his mistakes and is not interested in repeating them. Some of the thing he does in this book are utterly cheer worthy, especially the scene where he tells Diana's dad he is taking his airplane and doesn't really care if he has permission or if the plane comes back in one piece. He is, by no mean, a perfect hero. I wouldn't like him as much if he were. But he is growing, which is what should be happening. The interactions between Cyrus and Antigone continue to be a favorite aspect in this book:
Antigone burst out laughing, "I can't believe how much you screamed. Even after Arachne knocked you out again, though then it was more like you were gargling."
"Har, har," Cyrus said. "Like you would have done better."
"True. But the things is Rus-Rus"...Antigone slid onto the rock beside him, nearly knocking him off-"when I scream like a girl, at least I am, actually, a girl."
Their older brother Dan is featured more this time around as well, making this a truly great sibling story.

Another aspect of the book I love is the number of strong female characters who are a part of the team. Antigone is intelligent and tough. She rises to meet all the physical and emotional challenges thrown at her. When she is faced with putting a squirmy squid over her mouth so she can breathe underwater, she winces and prevaricates, but when it comes down to it she straps it on and does it. Diana can fly planes and is a crack shot with a gun. When the time comes for action she is at the front lines taking down enemies with her excellent shooting skills. Arachne is the only female transmortal Wilson spends significant time on and she is now one of my favorite characters.(Despite the spider army that travels with her. Shudder. I had nightmares due to her little friends. More than once.)  She is fierce in her convictions, willing to do what is hard, and makes tremendous sacrifices to overcome the evil being faced.

Again, I like the way the concept of immortality is addressed and am interested in seeing what Wilson does with it and all the transmortal characters. Particularly Nolan and Arachne, both of whom I love. Nolan especially. (He is a deceptively lazy thief. I can't help myself.) I loved this scene where Arachne and Nolan are explaining themselves to their mortal companions:
She glanced at Nolan. "We two still feel like mortals, like death was stolen from us. We are like you, the dying, not like Gil or the Vlads or Radu or Semiramis or even Ponce-those who fought against their own mortality."
George Livingstone adjusted his short blond bulk on the ground. "So...you want to die?"
Arachne nodded. Her ancient blue eyes were lightless and still. And then, slowly, a sun rose within them. She smiled at George, "Just not today. See, I am like every other mortal."
Nolan climbed to his feet, watching loose pine needles slide off his trousers. His face and  body still belonged to a boy , but to Cyrus, he seemed as burdened as the oldest man. when he spoke, his voice was low. "There are things on the other side of death that we may never see. Thirsts we may never quench. Tastes these mouths cannot consume. But down here, under the sun, there is nothing new."
Nolan. My heart aches for him and I have a feeling it might break on his account before this series reaches its completion.

I am looking forward to Book 3 more than I can possibly say. It can't come soon enough for me.

I read a version of this book made available via NetGalley. It is released for sale on September 11.

Stay tuned tomorrow for news of a Giveaway involving these amazing books.

I LOVED the scene when Cyrus tells Boone something along the lines of "I won't promise to be careful with your plane, but I will ..." (and proceeds to list his daredevil plans :-)
September 5, 2012 at 9:05 PM

Brandy said…
It will be up tomorrow!