September 04, 2013
If I said I was looking forward to reading Rose Under Fire I would be reducing a complex emotion far too much. I love Elizabeth Wein's writing. I trust her. If that weren't the case I probably wouldn't have read this. I took a class in college on the Holocaust taught by a woman who escaped the Warsaw ghetto as a child. I tend to be picky about books written about it as a result. If anyone other than a handful of writers had tackled this book I wouldn't have read it. Elizabeth Wein happens to be a part of that group of writers I trust enough. Rose Under Fire is devastating. I'm not going to sugar coat it. Wein didn't sugar coat anything either. It is an entirely different sort of devastating than Code Name Verity (my thoughts) to which it will be inevitably compared. It is a different type of story though and every bit as brilliant. 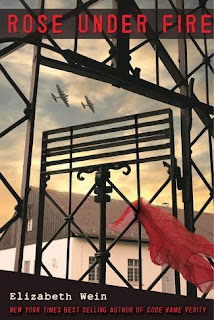 Rose is an ATA pilot, an American 18 year old flying for the British. After the liberation of Paris by the Allied forces Rose is returning to England when she encounters a V-1 bomb and attempts to divert it. Her attempt drives her toward enemy planes and she is forced to land in Germany. Now a prisoner of war, she is sent to Ravensbruck women's prison. Here Rose must find a way to survive, cling to hope, and help the women who become her family as she lives with the daily horrors visited on the prisoners by their vicious, unpredictable, and cruel captors.

Elizabeth Wein is able to make her stories feel so real because she creates characters with soul. She is a genius at creating distinctive voices that pull you right into the person's story and make them real live beings. At the opening of the book Rose's voice sounds so young. She is writing the accident report for a fallen comrade and she is torn up by this, but she is also distracted by her boyfriend, annoyed at the rations, afraid of the V-1 bombs, and caught up with the joy and thrill of getting to fly planes. The book is in the format of a journal. She is in Paris, then there are letters from people concerned when she goes missing, and then the journal jumps to her return. She picks it back up and writes out the story of what happened to her in Ravensbruck, and oh my-the change in her voice. She is still Rose, but she has aged years in the months since she last wrote and you can tell. I'm in awe of the way Wein was able to do this, maintain Rose and yet utterly change her at the same time. Rose is also a poet and her poems are woven into her narrative, and this is another area in which you see her change and grow. I loved those poems, both the ones from Edna St. Vincent Millay that she quotes, and her own. Two of the best lines in the book come from each of these. Rose uses Millay's "Dirge Without Music" as a a sort of rallying poem, thinking to herself those first few words, "I am not resigned". In one of her poems she wrote a line that she draws strength from later when faced with having to tell her story, "Fight with realistic hope, not to destroy all the world's wrong, but to renew it's good."

Rose's story is a hard one to read. Anyone who has read genuine real Holocaust stories or heard accounts from actual survivors will know this going in. It doesn't make it any easier to read. I had to stop every twenty or so pages to just sit and breathe, remind myself I wasn't suffocating. It is just that real. The horror of the day to day workings of the prison for political prisoners is laid out plainly. Rose finds herself in a group with "the Rabbits", the Polish prisoners the Nazis did experimental surgeries on. She is forced to perform the unpleasant job of moving dead bodies. The way the women band together in small rebellions that give them the hope to keep going is deeply affecting. (I'm crying again while typing this just thinking about it.) The terror that came from the complete unpredictability of their torturers is vividly conveyed. I appreciate the way Wein continued the story beyond the camp and to the Nuremberg trials too. She shows the struggle survivors had over telling their stories. The world needed to know, but didn't want to, and many of the survivors found they simply couldn't talk about it. I love how, though the story ends on a hopeful note, it is clear that the survivors still have so much healing to do, a process that will never end really.

Elizabeth Wein has constructed a brilliant first person narrative that gives the reader a close encounter with one small pocket of the Nazi torture and death machine. She does it honestly and with feeling. It's a story that shows the lowest depths that humanity can sink to and also the amazing heights it can reach for. It is a story that everyone should experience.

I read an e-galley received from the US publisher, Disney-Hyperion, via NetGalley. Rose Under Fire will be available for purchase in the US on September 10th.

Anonymous said…
"Rose is also a poet and her poems are woven into her narrative, and this is another area in which you see her change and grow."

I was completely in awe of this part of the narrative. How do you write poems that become better over the course of a story? Just, how?

Brandy said…
I know right? Showing growth even in the poems demonstrates serious mega talent. I'm in awe of what she's capable of.