Pi in the Sky

December 09, 2013
Wendy Mass is one of Bit's all time favorites. She reads everything of hers she can get her hands on. I had not yet read one of Mass's books and was looking forward to the experience with Pi in the Sky. Alas, I did not love it like I thought I would, but it is an enjoyable and fun read. 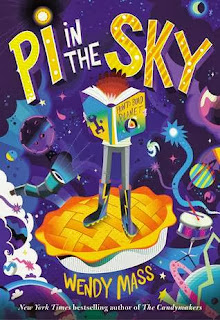 Synopsis:
Joss is the seventh son of the Supreme Overlord of the Universe. His older brothers help his dad rule the cosmos, but all Joss gets to do is deliver pies. That's right: pies. Of course, these pies actually hold the secrets of the universe between their buttery crusts, but they're still pies.Joss is happy to let his older brothers shine. He has plenty to keep his hands full: attempting to improve his bowling score; listening to his best friend, Kal, try (and fail) to play the drums; and exploring his ever-changing home, The Realms. But when Earth suddenly disappears, Joss is tasked with the seemingly impossible job of bringing it back. With the help of Annika, an outspoken girl from Earth, he embarks on the adventure of a lifetime...and learns that the universe is an even stranger place than he'd imagined.

As I've mentioned before, science was never my favorite subject. It just doesn't interest me and my eyes tend to glaze over whenever anything turns technical or scientific. This happened with this book. Mass bends the science some to fit her world but there are still paragraphs of scientific detail that had me skipping and skimming quite a bit. I also found I couldn't suspend disbelief enough to buy the whole system the plot is based on. I don't know if child readers would have the same issue.  This is the one Mass book Bit hasn't finished in a day. In fact she still hasn't finished it.

I did like the characters, particularly Joss. I also enjoyed watching the interactions he had with his brothers, his feelings of inferiority, and his relationship with both of his parents. Annika was also an enjoyable character. She is brave and has a lot of fight in her. I did think that the development of their friendship seemed a bit rushed. This could be because the whole last third of the book seemed rush in comparison to all the pages of set up with the world and science that went before it.

I think this is a good book to hand over to readers who enjoy a mixing of science and fiction, and enjoy a good adventure.