The Mark of the Dragonfly

March 17, 2014
The Mark of the Dragonfly by Jaleigh Johnson is a magical adventure tale that uses several tried and true tropes and expands on them in new ways to create a fun new tale. 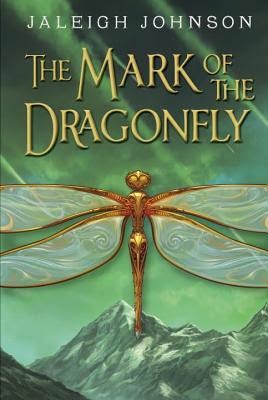 Piper has never seen the Mark of the Dragonfly until she finds the girl amid the wreckage of a caravan in the Meteor Fields.The girl doesn't remember a thing about her life, but the intricate tattoo on her arm is proof that she's from the Dragonfly Territories and that she's protected by the king. Which means a reward for Piper if she can get the girl home.
The one sure way to the Territories is the 401, a great old beauty of a train. But a ticket costs more coin than Piper could make in a year. And stowing away is a difficult prospect--everyone knows that getting past the peculiar green-eyed boy who stands guard is nearly impossible.
Life for Piper just turned dangerous. A little bit magical. And very exciting, if she can manage to survive the journey.

Piper is a girl with no family, who lives in a scrap town. Her life is supported by her extraordinary gift with machines and the "treasure" she mines from the meteorite showers. Treasure that includes watches, books, and music boxes that come from other worlds. Piper is a tough survivor. She has a couple friends, but in the scrap towns it is pretty much everyone for herself. When faced with choosing whether or not to help an inured and frightened girl fleeing the man who terrifies her, Piper does not choose to help solely because she is a good person. She is hoping to get something from it. But as she and Anna run from Anna's past and the secrets it holds, Piper comes to truly care for what happens to her. Theirs is a great friendship story, where there strengths and weaknesses work well together. Anna is a strange and different girl. I thought her big secret was rather easy to figure out, but  young readers are going to be shocked to their toes. The third character in the trio (it is a MG fantasy so there has to be a three part lead) is a boy in charge of guarding the train the girls stowaway on by the name of Gee. Gee is quick-witted and fiercely protective. Once he decides the girls are part of his train and within his circle of protection, there is nothing that will keep keep him for helping them. There is a flirtation that develops between Piper and Gee that is sweet and perfect for a MG book. While there is mystery and magic in each of the three main characters' stories, they are pretty much the standard trio of characters you find in a fantasy novel of this type. They don't really go beyond the basics of character development.

The world is contained to two different kingdoms completely cut off from the rest of the planet/place/dimension they inhabit. These kingdoms are, of course, on the brink of war. Anna is important to one of the kingdoms. She wears the titular mark of the Dragonfly, which means she is  under the protection of the king. Into this world debris that has been thrown away from other world comes in meter showers. (Including a copy of The Wizard of Oz.) The world is a fascinating concept in itself. The threat of coming war, the factories where people are losing their lives due to pollution, and the hard life of the scrap towns comes together to make a bleak place full of danger. This allows for our heroes to have more adventures. From the dangerous meteor showers, to stowing away on a train, to escaping slavers, to running from Anna's pursuer, to escaping dangerous sky raiders, there are plenty of adventures to go around. This is certainly a book for readers who like action packed plots. It does all make the book a bit longer than it needed to be and some of the scenes seemed superfluous, not adding much to the character development or the main plot.

This is a book I see appealing to the target audience well, particularly lovers of adventure and fantasy.

I read a ARC received at ALA Midwinter from the publisher, Delacorte Book for Young Readers. The Mark of the Dragonfly is available for purchase on March 25.