April 07, 2014
Claire LaZebnik is the most amazing at Jane Austen retellings. There is not anyone else who can do them quite like she can. She adapts these stories into a modern teen setting so well. Yes, she makes some changes in doing that, but they are necessary changes and I personally adore what she does with them. The Last Best Kiss is her latest, a retelling of Persuasion, and it is excellent. What makes it so excellent is not only the decent update of Jane Austen it is, but as always LaZebnik has again created a story that is appealing and relatable to teen readers who may have never read Austen or even know this is a retelling.

I read an ARC received from the publisher in exchange for a fair review. 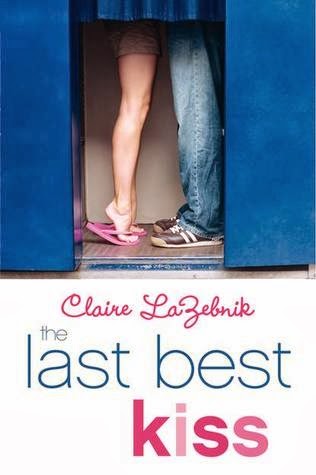 Synopsis:
Anna Eliot is tired of worrying about what other people think. After all, that was how she lost the only guy she ever really liked, Finn Westbrook.Now, three years after she broke his heart, the one who got away is back in her life.All Anna wants is a chance to relive their last kiss again (and again and again). But Finn obviously hasn’t forgotten how she treated him, and he’s made it clear he has no interest in having anything to do with her.Anna keeps trying to persuade herself that she doesn’t care about Finn either, but even though they’ve both changed since they first met, deep down she knows he’s the guy for her. Now if only she can get him to believe that, too....

Of all Austen's novels, Persuasion probably lends itself best to being reworked into a high school setting. When in our lives are we ever more persuadable than when we are young teens? True some people never grow out of that, but most of us hit our low point there. Anna does. She is in 9th grade and wants nothing more than to be accepted by her friends. Her family life is terrible and school is the only place she is not alone. Finn fills her life with joy and fun. She adores him, but is too afraid to stand up for him and what she feels for him. Finn has good reason to be angry at her. (Better than his original counterpart did if you ask me.) She did embarrass and hurt him for no better reason than being afraid of what others might think of her. When he moves back during senior year, however, he is much cuter and less nerdy. The nerd is still there, but he lets that part of him out far less. I love that when it does escape it is usually in relation to Anna and something she has done to set it off. And she loves that part of him and wants to see it more. Their story is adorable for what it is even without knowledge of the original. I really liked Anna and how she tried to make amends, knows she did something truly wrong, and attempts to move on. She is still fixated on Finn, but it is not in an unhealthy or overly emotional way. As for Finn...well. He is exactly the sort of boy I always liked in high school. (The sort of boy I married even.) Let's just say I liked him lots. The supporting cast of characters are all truly well done too. The group of friends Anna and Finn have are fantastic. They are all very different but they have a great rapport and the banter between them all is wonderful. Lily (who is the Louisa counterpart) can be obnoxious, but the reasons for that become clear and she isn't that way simply because she is Anna's competition for Finn.

The plot follows along the same basic lines as Persuasion. I do like that we saw some of Anna and Finn's freshman year relationship and the person he was before she embarrassed him. The whole "accident" scene makes far more sense in this context as well. While I liked seeing the connections from this plot to the original, it is one that can be enjoyed for itself without knowledge of the original novel. It is a story relatable to teens in so many ways: societal pressure, fears of the future, stress about college, and the family and friendship issues that plague everyone. In addition it is just a delightful romance. I had so much fun reading it. I seriously hope LaZebnik continues these.

Content Note: There is some discussion of sex, some underage drinking, and illegal drug use.

I read an e-galley made available by the publisher, Harper Teen, via Edelweiss. The Last Best Kiss is on sale April 22.