August 01, 2014
Set in an alternate 19th century and in such places as Prague, London, and the heart of the Roma camps, the trilogy has steampunk, political intrigue, and plenty of adventure.

The Cabinet of Wonders 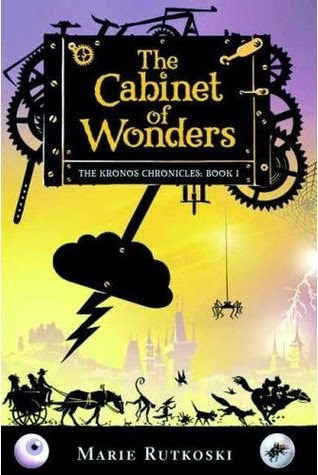 In this first book we meet our three indelible heroes, Petra, Tomik, and Neel. Petra is the daughter of a mechanics maker. Her father creates, using his magic, small critters who have personalities and can talk and other creations. After he is returned from Prague and a job with the prince with his eyes removed so the prince can use them as his, Petra runs away to Prague to try and steal the eyes back and find herself in a center of international political intrigue. Tomik is Petra's best friend in her home town. He also possesses magic and creates extraordinary things. His creations play a huge part in the plot even though he is absent for much of the plot. Neel is a Roma thief with extended ghost fingers Petra befriends in Prague. He helps her in her searching of the palace and pilfering of the prince's mysterious Cabinet of Wonders when it comes time to retrieve what she came for. This book is the kind of book I like to point to when people say children's books are simple or easy. There is a lot going on here in a world that works nothing like our own with interesting developed characters and rich themes. I enjoyed watching Petra learn about the world even though she had to make mistakes to do it. I feel l like her level of naiveté and inexperience were exactly right. Neel is also a great character, but I always have a soft spot for brash outspoken thieves. The rest of the cast of supporting characters shine as well, especially Petra's pet animatronic spider, Astrophil. The pacing is top-notch, moving Petra from village to plan to Prague to palace to resolution quickly and yet with no holes. Once I finished this one I could not wait to get my hands on the sequel even though this one ends this particular plot nicely. Scattered through the book are little gems of wisdom that I love to find in my books such as:
It's easier to blame you sorrows on one person than on a group of them. Then you can believe that if only that person were to disappear, everything would be different, better. Maybe that's true sometimes. But more often than not it's just wishful thinking.
And:
If you would like to know how easy it is to overlook evil, to see it for something else, Petra could tell you: it is the easiest thing in the world. 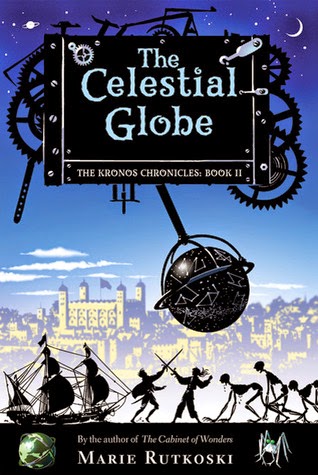 The Celestial Globe gets off to a fast paced start and I was instantly pulled into the story. Of course Prince Rodolfo discovered what Petra was up to in the first book, and he goes about trying to locate and annihilate her in the worst sort of way. Fortunately for her, the mysterious and complex John Dee comes to her rescue. At the same time, in one of the craziest and likely coincidences I've seen in a plot in some time, Tomik and Neel find themselves on a gypsy ship together. I have to say I wasn't nearly as enamored with this volume as I was the first. If I had to sum up my feelings in one word, that word would be FRUSTRATION. My frustration has a name. It's Petra. She had the right amount of naiveté and innocence in the first book. She has had months to ruminate over what took place in Prague and then witnessed exactly how ruthless the prince can be, but still chooses to fly through life relying on her emotions. It got real old real fast. This girl is one of whom it can be said once her good favor is lost, it is lost. Except who loses her favor and who doesn't is completely arbitrary and based on her petulant childish need to have her own way in all things. Now one can argue she is a child, and can be forgiven. Yes. But one can also argue that she has experienced enough and is close enough to adulthood in her world to get over herself. I pretty much lived for the scenes that switched to what was going on with Neel and Tomik. I thoroughly enjoyed watching these two make a tentative alliance that gradually grew into true friendship. I also quite liked the addition of Margaret and Madinia, Dee's daughters. Sadly most of the book focused on Petra and her refusal to THINK logically. Or at all really. By the end of the book I was so throughly annoyed with her it put me in a rather bad mood. I really couldn't understand why she would hold someone who tried to help her in contempt for so long. And even if she didn't want to like him, she at least could have taken advantage of what he was trying to teach her. Even after she found out things about him that were truly good and everything pointed to him being an honest, compassionate man, albeit a powerful and dangerous one, nothing would changer her mind. Yet the traitor who nearly gets her killed deserves her forgiveness. Okay.

The Jewel of Kalderash 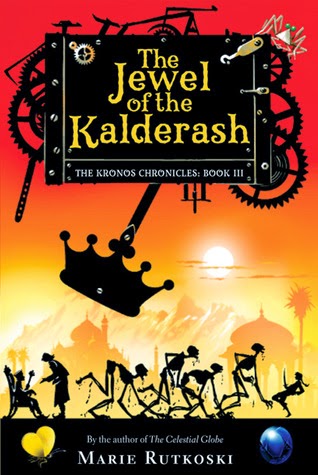 This book made me want to weep. I liked the first book so much, but things just kept getting worse instead of better. I don't really have much to say about this book. It brings all the favorite characters together for the end and tragically kills one of the best ones. Not that Petra the Petulant cares much because what does she care about???? Her  father. Astrophil. But yeah, that pretty much covers it. But I think that caring is in itself fairly selfish. I wanted to reach my hands into the book and wring her neck on multiple occasions. SHE is the one who is important. SHE is the one who matters. SHE made some stupid decisions in the last book, but other people who never did anything to hurt or harm her face her mistrust because SHE made the decision to trust someone she shouldn't. UGHHHHH!!!!!! I stopped caring entirely. Because despite her bratty petulance, everyone still loved her. She lies, she walks all over people, she puts people in needless danger, and yet she is the hero. I just can't even.

My recommendation? Read the first book, which ends in a way that is satisfying enough and great fodder for the imagination. Skip the rest.

Brenda said…
Ugghh is right, it sounds like the next two are not as good as the first. I really did enjoy The Cabinet of Wonders and Astrophil was wonderful in that one. I really liked the varied abilities that each character had. My favorite quote was "The horseshoe makes its own luck."
August 1, 2014 at 11:07 AM

Brandy said…
There are other people who really liked the last two so mine is just one opinion. I just could't deal with Petra's characterization.
August 2, 2014 at 9:22 AM