September 08, 2014
For fans of the Magic Thief series by Sarah Prineas, the latest installment, The Magic Thief: Home, is a much anticipated and highly welcome addition. It also has the potential to draw in new fans as a new chapter in Conn's life and the city of Wellmet begins. Whether readers are old fans or newly experiencing the magic for the first time, every reader of this book is in for a fantastically twisty tale of magic, mayhem, discovery, and intrigue. 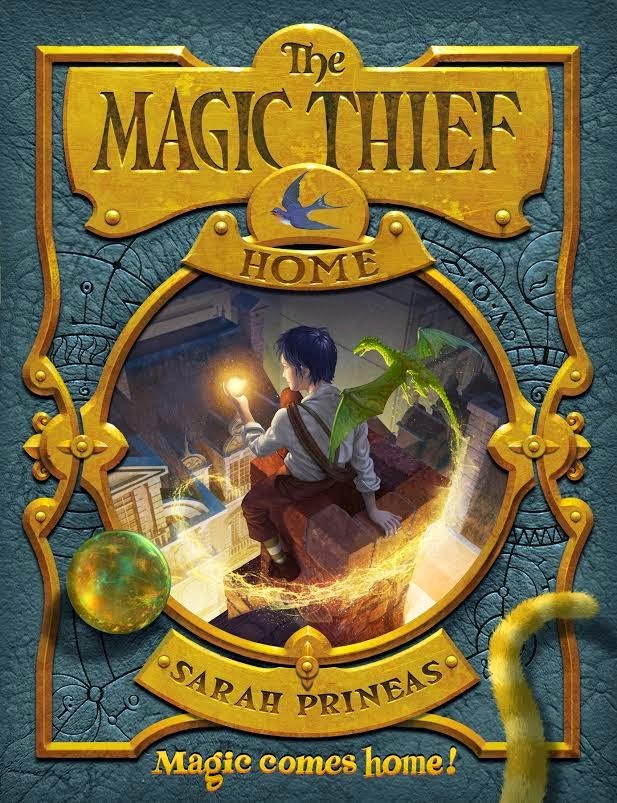 Synopsis:
Despite successfully securing a balance between the competing magics of Wellmet, Conn is not happy. Duchess Rowan has promoted him to ducal magister, but the other wizards see him only as a thief. But something sinister is brewing, as magicians’ locus stones are being stolen and magical spells are going awry. As Conn faces old enemies and powerful magical forces, is he strong enough to save the city he calls home?

Conn is a bit out of sorts since finishing with the magics of Wellmet, returning home, and having his magicalicus swallowed by a small dragon he calls Pip. Who is he? Where does he belong? What is he meant to do now? The magics in Wellmet are similarly out of sorts, competing for the power of the town. Conn is the best one to deal with the magics as he understands them best, but when he is in such turmoil himself, embroiled in another spree of crime, mystery, and intrigue he has to solve, it is difficult to stay focused. I loved the way the magics reflect and contrast Conn's own character. He is wild, not meant to be locked down, and hates being manipulated, but at the same time wants a purpose and stability. He thrives on danger. Of course, everyone who loves Conn just wants to protect him. Ro and Nevery feel the best way to do this is to make him the ducal magister but Conn is having none of that. Conn's stubbornness is familiar to older reader's of the series, as is his friends' exasperation with him. It has a different feel in this book though and is not just he same old story as the original trilogy. They've all grown a lot and are facing a new reality. Conn is starting to realize he needs help from time to time and relying on others is okay. The others are starting to realize trying to manage Conn is a lost cause, and one by one they fall to trusting him to do what must be done and do it well.

One of the great strengths of this series is how it highlights character and relationships so well, but does it simply through showing them in the context of a fast moving, exciting, and twisty plot. It is so subtle and yet you can not read these without coming away feeling connected to all these characters and seeing their strong connections to each other. I love the friendship between Conn and Ro, and how it is just a friendship. (Please, please, let that continue to be the case. And there are hints that it will continue to be the case, thank goodness. I like the direction of those hints a lot.) I love it when books can show a good male/female friendship that is nothing more than that. (Yes, they do exist!)

The story finds Conn yet again trying to prove he is not the gutter-boy thief he once was, but it is interesting that there are actually very few people who assume he is. There are some, as there will probably always be, but for the most part, he is trusted by those around him. The story is from his point of view, yet it is clear that he is still reacting to how people used to see him automatically rather than how they are reacting to him now. Conn's talents and spotted past are essential to unwinding the knot of magic and criminal acts being visited on Wellmet. This leads to some dangerous situations and a couple moments of peril that had me visibly trying to restrain myself from reacting since I was reading the book in public. All my emotions were fully engaged and that made for some fraught moments for my poor heart.

Fans of this series definitely do not want to miss this latest installment. It very nicely lends itself to new readers too. The necessary events from the previous books are included in clever ways that new readers will know what is going on, and old readers won't be bored reading a lot of information they already know. (It's also a nice refresher for those who may have forgotten.) At the same time, this is a new phase in Conn's life and the story reflects that. It isn't a continuation of the old story so much as the beginning of the next part of Conn's story. I do think new readers of the series will find themselves unable to resist going back and reading the first three.

I read an e-galley provided by the publisher, Harper Children's, via Edelweiss. The Magic Thief: Home will be available September 16.

Brenda said…
I was hoping that there would be a recap of the story (it has been awhile since I've last read Sarah Prineas Magic series books). I'm looking forward to revisiting it though.
September 8, 2014 at 1:29 PM

Brandy said…
The recap is done so expertly. Prineas should give classes in how to write a recap that will give all the information needed without boring returning readers.
September 9, 2014 at 8:56 PM