July 02, 2015
Today I'm thrilled and excited to be hosting the cover reveal for Secrets of the Dragon Tomb by Patrick Samphire. I've been looking forward to reading this book since I first heard about it, and I'm so happy it's release is that much closer. The cover is wonderful too. It's as unique as the book's concept and fits its synopsis so well. As a bonus, Patrick has answered some questions and given a little more information on the book. 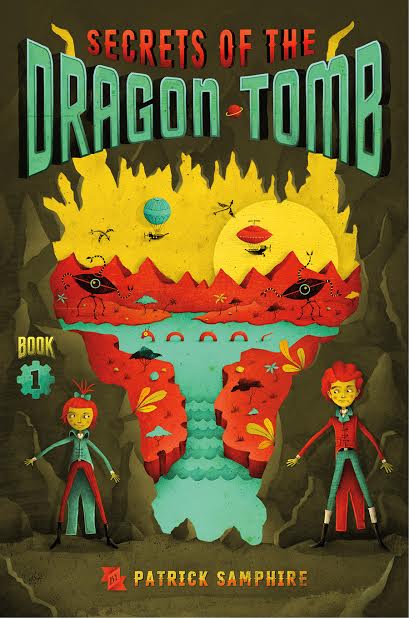 Mars in 1816 is a world of high society, deadly danger, and strange clockwork machines.

Twelve-year-old Edward Sullivan wants to become a spy like the ones he reads about in his favorite magazine, Thrilling Martian Tales, but he’s far too busy keeping his eccentric family from disaster. All of that is about to change. In the north, great dragon tombs hide marvels of Ancient Martian technology, and the villainous archaeologist Sir Titus Dane is determined to loot one.

When Sir Titus kidnaps Edward’s parents, Edward, his sisters, and their mysterious cousin set off in pursuit across the Martian wilderness. Together they must battle Sir Titus’s minions, dodge hungry pterodactyls, and escape fearsome Martian hunting machines in order to rescue Edward’s parents and uncover the secrets of the dragon tomb.

Tell me a little bit about the cover.

The cover and the illustrations inside the book are by the wonderful artist Jeremy Holmes. He came up with three concepts for the cover, and this one was the one that everyone loved. The book is set on Mars in 1816, but it's a very different Mars from the one we know. It's full of weird creatures and plants and very, very strange machines.

The two children on the cover are Putty (the girl) and Edward (the boy), who are sister and brother, and they are the main heroes of the book. Edward is our point of view character, and Putty is his far more brilliant and unpredictable sister. The cover isn't a particular scene from the book, more an amalgam of various parts of the book and the world.

What I love about the cover is the vibrant colors and sense of adventure. There's so much going on in the book, and Jeremy has managed to capture the excitement and energy of it. I think he's also managed to capture Edward and Putty's personalities really well.

If you were guiding tourists around 1816 Mars, where are some of the places you would take them?

In fact, the Grand Tour of Mars is an extremely popular diversion among wealthy young men and women, particularly since Napoleon's armies have conquered mainland Europe, leaving Britain isolated and weak.

If you were planning your Grand Tour of Mars, the absolute first priority would be the dragon tombs of Lunae Planum, where the bodies of the Ancient Martian emperors were buried along with the preserved bodies of their dragons and the marvels of technology that have transformed both Mars and Earth. You would probably want to visit the hanging ballrooms of Tharsis City, the capital of British Mars, and take a relaxing holiday on Gadsden's Floating Hotel, from where you can take a trip on a submersible to the strange ruins far below the surface of the Valles Marineris.

Those who are of the more adventurous disposition would definitely want to try sky leaping in the air forests of Patagonian Mars and explore the ice caverns below New Guangzhou.

And, of course, if you have the inclination, a trip to the most impressive relic of the Ancient Martian civilization, the Great Wall of Cyclopia, 750 miles long and three hundred yards high, which cuts off the whole of the Amenthes Peninsula and beyond which you can find those terrible reptiles, the dinosaurs.

Who would you recommend this book to?

SECRETS OF THE DRAGON TOMB is a thrilling adventure story, first and foremost. I would recommend it to anyone who loves middle grade and who wants their adventures fast, funny, and full of quirky invention.

Is this a stand-alone novel or a series?

It's the first book in a series, although you could certainly read it on its own. There aren't any frustrating cliff-hangers at the end! The second book in the series is THE EMPEROR OF MARS, which will probably come out a year later (I don't think the exact publication date has been set yet).

About the Author:
Patrick Samphire has been charged at by a buffalo in Africa, been lost in a rainforest in South America, and been scared by a camel in Egypt. He has worked as a physicist, a teacher, an editor, and a web designer. He now lives with wife and two sons in Wales. He has not yet gotten to Mars, but he’s still trying. SECRETS OF THE DRAGON TOMB is his first book.

Erin L. Schneider said…
Congrats on the gorgeous cover!!! The colors are perfect and definitely make this one stand out!
July 2, 2015 at 4:14 PM

Patrick Samphire said…
Huh. Now it looks like I must have said something dubious, but really I just meant to reply to the comment above. I am inept...
July 2, 2015 at 5:06 PM

December 15, 2015
Shadowshaper  by Daniel José Older is everywhere. Best of lists. Award buzz. Blogs everywhere. It's one of those books everyone is reading and talking about. I had it on my TBR but decided I definitely needed to read it before the year was out just so I could weigh in on one of the most talked about books of 2015 if asked. It is deserving of every good thing said about it. Every. One. Sierra was looking forward to a relaxing summer break. Her plans involved hanging out with her friends and painting. They did not involve being chased by zombie like creatures and threatened by a magical power connected to her family's heritage she has never heard of. When murals begin fading all over her Brooklyn neighborhood, Sierra is perplexed. When her grandfather, who had a stroke, begins to apologize and starts repeating strange phases and insisting Sierra get the help of a boy she barely knows to help her finish her mural, Sierra is concerned but mostly about her grandfather. Then at a
3 comments
Read more