September 09, 2015
Crenshaw is Katherine Applegate's most recent novel since winning the Newbery for The One and Only Ivan. It is, understandably, highly anticipated by many. It has also been greatly lauded even prior to its release. It's possible I'm just having a grumpy really off year, but the MG novels of 2015 that are getting the most acclaim and hype are leaving me cold. Crenshaw is another in a long line of these. There are a lot of good points to it, but I was mostly underwhelmed. I do think it tells a story that we need to see in children's literature more often though. 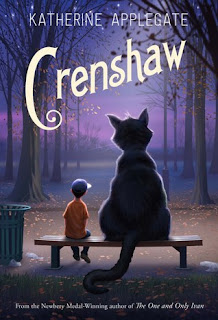 Jackson is stressed out. His parents are selling their things. There are late night conversations that turn to arguments between them. The landlord has been visiting often. There is little food in the house and the power was turned off for a few days. Jackson knows what all of this means because he has been down this road with his parents before. The last time it meant living in their van for a month and eating of road stop vending machines. He doesn't want to go back to that. And just like last time, Jackson is being visited by his imaginary friend, a giant cat named Crenshaw. Jackson feels he is way too old for an imaginary friend and old enough to be told the truth by his parents.

Showing the struggles of families who don't have enough to eat or are in danger of losing their homes is rare in MG fiction. I love that Applegate chose to tackle that with this book. There are kids who will see themselves in Jackson that have never seen themselves reflected in a book before. There are kids who may realize for the first time just how hard some of their peers may have it and learn a little empathy. Those are tremendous things, and I really loved this part of the story. I loved Jackson and his obsession with logic, his dry humor, and his love for his little sister. At times, the message seemed a little heavy handed to me, but at the core Jackson's story of struggling to love and understand his parents while he is angry at them for not doing better is a very real and poignant one.

Why am I not more excited for this book then? Unfortunately the premise itself didn't work for me. At all. I would've liked this so much better without Crenshaw. Not because I think imaginary friends are not something that will also speak to a lot of kids. I know they will. It was just awkwardly executed here. Every time Crenshaw showed up it felt so forced, and these are the parts of the book that come across as the most didactic too. It detracted from my being able to throw myself wholeheartedly into the story. There were also times I felt the humor was more for the adult audience reading it than the child audience.

This is also another in a long line of hyped books this year where I've wanted to smack the adult characters upside the head.

It's definitely a book whose cover will call to kids, and it's a good one to have around.

I read an ARC provided by the publisher, Feiwel and Friends, via NetGalley. Crenshaw goes on sale September 22nd.

Melissa said…
I felt much the same way; good story, but why the imaginary cat? SO much better without it.
September 9, 2015 at 9:21 AM