When I Was The Greatest

February 22, 2016
Jason Reynolds is one of my favorite authors I discovered in 2015 after reading both his releases from last year. I didn't have time to get to his debut novel, When I Was the Greatest, last year but made it a top priority of this year. It confirmed and enlarged my love for his work. 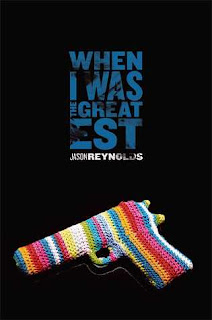 Ali lives in Bed Stuy with his mom and little sister. His mom works two jobs, one as a social worker and one at a department store, to keep up with the ever rising rent on their apartment thanks to all the white people moving in near by. Ali knows his mom has high expectations of him. He is supposed to do well in school. He is supposed to earn money doing honest work for his boxing instructor, Mr. Malloy. He is supposed to look out for his sister. He is supposed to stay out of the trouble that can occur in their neighborhood. When Ali meets a new boy who moves in next door, he finally has a friend in the neighborhood. Ali's sister Jazz gives their new neighbor the nickname Noodles. Noodles as a brother who has Tourette's Syndrome. He is known as Needles because he constantly knits in an attempt to control his fits. Ali, Noodles, and Needles are team. They do everything together. Needles is often included begrudgingly by his brother, but the boys are a solid group. When the boys have an opportunity to go to a secret adult party in the neighborhood but only if Needles comes too, they jump at the chance. But at the party all three boys will be in over their heads in different ways, and have to confront harsh realities about themselves and their relationship.

Jason Reynolds is a master of voice and character. It is little wonder I love him then as that is my jam. His talent with both truly shine in this novel. From the first sentence Ali's voice completely captures the reader. I was spellbound from the start as if Ali were right next to me sharing his story. The structure has that sort of oral story flow to it too. Through Ali, the neighborhood and all the people in it come to life. There isn't a single person in this book who I didn't love, but by page 15 my heart was completely captured by the three main characters. Ali is smart, hardworking, compassionate, and loyal. He is desperate to stay out of trouble and terrified of disappointing his mother. He loves boxing but is afraid to face off in a fight. He is very much 15 with all the youthful exuberance and lack of common sense and maturity that accompanies that, but he is a good person. Noodles is desperate for approval but not always the right kind. He hates that he doesn't have enough money so he tries to hustle out of life what he can, and acts like a tough guy even though he is terrified on the inside. Needles is genuinely good. Devoted to his brother, excellent at freestyle rap, and a terrific dancer, her bears the brunt of his brother's anger on most days. Through much of the book he is the most unknown factor in the trio. This is not because he is a prop, but because this is Ali's story so much of what the reader knows of Needles comes from Ali and his biased view of what is happening and how he views those around him. What is revealed about all three boys in the last third of the novel is a result of circumstance but was always a part of who they were. Ali just had trouble seeing everything.

The party is the climax of the book, but it only takes up a small portion of the pages. The majority of the book is spent leading up to it. This is not a book that revolves around the plot. It is all about relationships. It demonstrates the devotion and sacrifice good parents are willing to make for their kids. (And how "good parent" is not a text book term. Good parents come in various shades of gray.) It shows the impact selfish parents who choose themselves and their own pain over helping their kids have. There is a spectacular contrast shown here. It's a story of friendship and the limits that can have. And it's a great sibling story at its core. It shows how truly devoted siblings can be toward each other while also being resentful and squabbling. Ali and Jazz have an amazing relationship and I loved all their interactions. Noodles and Needles have a more fraught and difficult relationship but they are still brothers to their core and it is just beautiful from beginning to end.

Reynolds writing always pulls me in and in this book there were some parts where I was seriously tense. I stopped reading it for a couple of days because I knew nothing good was going to come of that party. I wanted to throw my arms around all three boys and yell, "Stay safe!!!!" Then the resolution of the events that arise from the incident at the party made for some tense moments too, but I loved how it all ended up. I appreciate Reynolds approach to writing real people in real situations that are hard but always filling them with hope too.

If you haven't given Jason Reynolds a try yet, you need to. He has a MG book coming out in May. After loving three YA novels from him, I'm looking forward to seeing what he does in a MG.