Cover Reveal for Cloud and Wallfish by Anne Nesbet

March 11, 2016
Anne Nesbet is a must read author for me. I've enjoyed all of her books. (If you haven't read last year's The Wrinkled Crown, you are missing out on one of the best MG books of 2015.) This being the case, I'm so excited to bring you the cover reveal for her 2016 release, Cloud and Wallfish.

The  cover is amazing.

The synopsis has me wanting this book NOW.

Anne's interview following the cover and synopsis is a must read that offers insight into the books and characters. (Did I mention I want to read this book now?)

And without further ado: 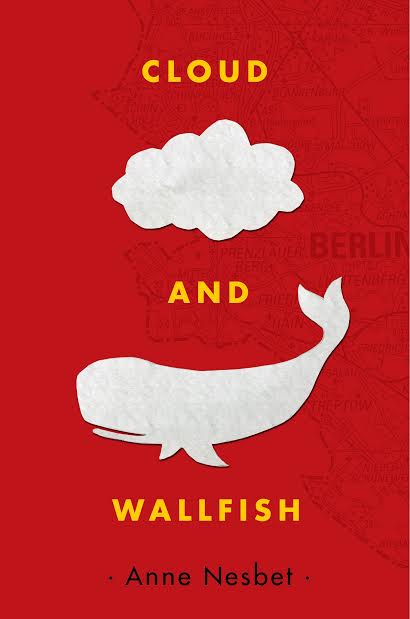 Friends you make while the world is falling apart are friends you keep forever.

Noah Brown's ordinary, everyday life is smashed to smithereens the day his parents tell him his name isn't really Noah, his birthday isn't really in March, and his new home is going to be East Berlin, on the other side of the Iron Curtain. It's 1989, and everywhere all around countries are remaking themselves, but in East Germany the air is full of coal smoke, secrets, and lies. It's not safe to say anything out loud in the apartment. It's not safe to think too much about where you came from or who you used to be.

It's also about the least likely place in the world for a kid from America with a lot of secrets of his own (and an Astonishing Stutter) to make a friend.

But then Noah meets Cloud-Claudia, the lonely girl who lives one floor down with her terrifying grandmother. Something has happened to her parents, but what?

Armed with a half-imaginary map and a shared fondness for codes and puzzles, Noah and Cloud-Claudia have to find their way in a world where walls--and the Wall--are closing in.

Anne answered some questions about the cover, the story, and characters.

Can you tell us more about the cover?
Oh, I was so thrilled when I saw this cover! I hadn't imagined anything like it. In fact, I do believe my "imagined cover" was a sort of teal blue color and had stick figures on it--which just goes to show why I should be kept far away from visual design or even (as my students can attest) chalkboards. The genius behind this cover is Maryellen Hanley. Let me just point out a few of the wonderfully clever things she has done here:
1. The color scheme (black-red-gold) is that of the flags of both the Federal Republic of Germany (aka "West Germany") and the German Democratic Republic (aka "East Germany") The cloud and whale icons are the color of paper, which is appropriate, too.2. The map in the background is an East German map of East Berlin. The blank space on the left is where "West Berlin" should be, but West Berlin was left blank on East German maps.3. The word for "whale" in German is Walfisch, which my main character hears as "Wallfish." That becomes his nickname, due to--reasons explained in the story.4. "Cloud" is the nickname for my main character's East German friend, Claudia. Notice that Maryellen Hanley even managed to put Cloud's cloud icon over the "East Berlin" part of the map, and my main character Noah's whale icon over the blank "West" (as an American, he comes from the western side of the Wall).
5. I have always secretly thought my name--"Anne Nesbet"--was about the dullest and most boring name anyone ever had. But looking at this cover, I realize that I just should have been adding little black dots before and after! They magically make my plain old name look awesome!

What drew you to this particular time and place as a setting?
Cloud and Wallfish  is a story very close to my heart, because like Noah, I spent much of the eventful year 1989 living in East Berlin, doing research for my dissertation. Like Noah, I found myself caring deeply for the people I came to know on the other side of the Wall. We improvised feasts together, using cabbage and onions and North Korean soy sauce. We went on long walks in the woods surrounding Berlin and went to see experimental plays and listened to writers speak slant-wise about their hopes for the future, and we talked and talked and talked while walking through late-night East Berlin, under the watchful eye of the Television Tower. Ever since that time, I have wanted to speak about this strange-but-familiar other world I lived in for a while, on the other side of the Wall.
Reading the copy, one might assume this is a historical fiction with no fantasy element. Is this historical fiction or historical fantasy? Can you talk about why you chose to write whichever one it is?
My first three novels (The Cabinet of Earths, A Box of Gargoyles, and The Wrinkled Crown) were all fantasies, the first two set in Paris, and the third set in an imaginary place I made up myself. But Cloud and Wallfish is historical fiction, set in a real place (East Berlin) at a real point in history (1989)--though it could also be said to be like The Wrinkled Crown, in that it's about a divided world. The main characters in the story, Noah and Cloud-Claudia, do construct a sort of fantastic world of their own, however, inspired by the map of East Berlin.
What was your favorite part about writing this story?
I absolutely loved immersing myself in 1989 again. And I went back to visit East Berlin while writing the first draft of Cloud and Wallfish, which was a great joy. Also the spy-versus-spy interrogation scene was incredibly fun to write, though not so much fun for my poor characters to experience.

Who would you recommend this book to?

Anyone who likes adventure stories about friendship and spying! (Officially speaking, Cloud and Wallfish  is aimed at the 8-14 age range, but as we all know, real readers for any book come in all shapes and sizes and ages.)

Thank you so much for these great questions! I really look forward to seeing Cloud and Wallfish out in the world in October!

Thanks to Anne for the insight into this new book. As a fan of adventure stories about friendship and spying, I'm looking forward to this!

DonnaGalanti said…
Anne, what a fascinating interview and book! Loved hearing your real-life experiences behind it. Wishing you much success with it!
March 11, 2016 at 7:03 AM

Maria Gianferrari said…
I'm especially looking forward to this one, since my husband grew up in West Berlin!!
March 11, 2016 at 10:57 AM

Brenda said…
Love the design of the cover and the subtle way the map is incorporated into the background. Cloud and Wallfish sounds fascinating.
March 12, 2016 at 11:44 AM