Some Kind of Happiness

May 10, 2016
When I read MG, it is often a balancing act. I read MG as a teacher who wants to have great books to put in the hands of kids that will excite them about the world around them and what they can learn about it from books. I read MG as a mom with kids who I want to inspire and (at some times) protect. I read MG as myself just because it's some of the best literature out there and I love it. Sometimes the these three different roles of mine are in disagreement. More often than not they are in agreement. I usually am aware of all three roles whenever I am reading though. Rare is the book that comes along and makes me forget all of that and just live it. Some Kind of Happiness by Claire Legrand was one of those rare books. 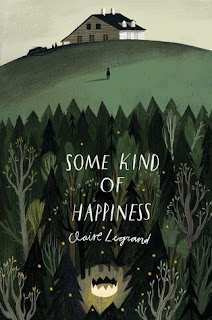 Finley Hart is spending the summer with father's family who she has never before met. Her parents are having problems and feel a couple of months to figure out their next step will be a good thing. Finley finds herself surrounded by cousins she has never met, aunts who say cryptic things, and grandparents who she feels distant from. Finley has always found comfort and solace in her writing. She has notebooks full of stories of the Everwood, but then she discovers the Everwood right there behind her grandparents' house. In the woods she discovers an abandoned house with a secret, a group of pirate boys she is not allowed to talk to, and freedom and joy with her cousins who she lets into her world. But something isn't right. Not in the Everwood. Not in Hart House. Not with Finley. To save the Everwood, Finley has to save herself, but she will need all the help she can get from the people who love her.

Some Kind of Happiness is an intense read. Legrand's prose pulls the reader in from the very first page and doesn't let go. I did not want to put this book down. There were times I had to out of necessity but I found my thoughts consumed by Finley and her world while I was away from it. This is a book where the character relationships are far more important than the plot (though the plot is important and fabulous too). Books like this are my favorite especially when the relationships develop organically. The book begins with Finley feeling abandoned and alone. She is scared and confused. Her world has become very small and it is almost claustrophobic. With each new human connection Finley makes both she and her world start to open up. The relationships with each of the family members is incredibly well done. Finley's adventures with her cousins closest in age to her are wonderful. Finley's growing closeness to her grandfather and the truly heartbreaking roadblocks that spring up in that is beautiful. Finley's relationship with Jack Bailey, a neighbor boy the Hart grandchildren are not allowed to associate with, is about as perfect a friend/crush relationship in a MG as I've seen. But my favorite is Finley's relationship with her teenage cousin Avery. Avery and Finley are incredibly similar and I adored what they did for each other. Finley's growing relationship with her grandmother is complicated and fraught. The strength of all of them is how realistically messy they all are. A major theme in this book is family love and bonds. The way those supersede a lot of awful aspects of people's personalities and pasts.

The story of the book is Finley's journey mirrored by the story of the orphan queen of the Everwood in Finley's stories. There is a mystery and secrets. Legrand hands the pieces of the main puzzle to the reader one piece at a time until the story culminates in a huge reveal. The reveal itself is not powerful in its shock value, but its emotional payoff. The way it makes all the complicated messy relationships and the darkness in Finley's mind come together in a beautiful hard cathartic moment. But nothing is ever as easy as that and there is fallout and problems still to be faced. The story of the dark secret in the mystery mirrors Finley's personal secret-the depression and anxiety she is fighting but can not control. The way Legrand built these two threads parallel to each other and then wove them together is noting short of genius.

Some Kind of Happiness is not a book that is going to hold universal appeal for all readers, though it does have a little something for everyone. It does add something to MG we don't have-an amazing in depth heartfelt look at childhood depression. I hesitate to say that because I'm afraid people will immediately think that dealing with depression equates with depressing. That couldn't be further from the case. There is hope, joy, humor and every human emotion imaginable in this book. It is LIFE and it is beautiful.

I read an ARC made available by the publisher, Simon & Schuster Books for Young Readers, via Edelweiss. Some Kind of Happiness is on sale May 17th.

Anonymous said…
I'm so excited to read this! The idea of the character's world expanding sounds like a perfect exploration of her overcoming her depression.
May 10, 2016 at 10:05 PM