The Boy at the End of the World

August 08, 2016
The Boy at the End of the World by Greg van Eekhout has languished on my TBR for the longest time. A few weeks ago Sarah Prineas asked on Twitter if I had read it (I can't remember in relation to what). I almost responded, "No, but I plan to get to it someday." I stopped and thought, "Why wait though?" I then put it immediately on hold. I'm very happy I did because it is a wonderful adventure and I'm kicking myself for not having picked it up earlier. 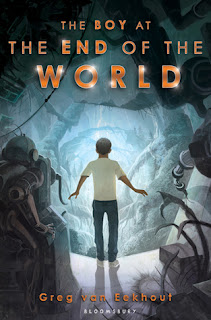 Fisher wakes up covered in goo emerging from a birthing pod. He is aware he is newly born. He knows the world is dangerous. He realizes he is also in imminent danger and it is his duty to survive. Shortly after his emergence into the world, Fisher is found by a robot whose job it is to keep him alive. Fisher is part of the Ark-a place designed to preserve the human species so that they may survive following the devastation they wrought on the planet. The robot, who Fisher names Click, downloaded the Fisher profile into Fisher and activated his birth when the Ark was attacked from an unknown source. Fisher is the only survivor of the Ark's devastation. After exploring his world and discovering how much has evolved, Fisher learns there was more than one Ark and sets off to find if there are any other humans. He travels with Click and a wooly mammoth who acts like a giant dog. Fisher discovers that animals have changed in strange and unpredictable ways and that these organisms aren't the only things evolving. There is something far more sinister out there that is convinced it knows exactly what is right for Fisher-whether he agrees or not.

Whoa boy. This book has so much going for it. It is short, fast paced, full of adventure, and has a sly humor. We all know how I feel about survival stories and I LOVED this book. That should say something. Part of that is due to Fisher not completely being alone as he survives. For a robot, Click is a pretty fantastic foil. Their interactions and the eventual relationship that develops between them is wonderful. Fisher as a main character is wonderful. He is "born" as a tween and is naturally endowed with all of the snark, inquisitiveness combined with caution, and longing for a place to belong that is trademark of the age. Click for his part is quite the snarkbot himself. The banter between the two is excellent with Click acting as teacher, parent, mentor to the confused Fisher.

The world Fisher is exploring is new and different enough to make for fascinating reading too. Eekhout uses his words well. He uses them economically while still providing enough imagery to convey the world Fisher inhabits. He changes things just enough that they are familiar to the reader yet come with a new type of danger and edge. I really liked the way he made the safe not quite so safe anymore too.

The plot is fast paced and moves from one problem Fisher encounters to another as he journeys to find a human companion. In many ways this is the familiar hero-quest story except in the future with robots as companion instead of bards. It works incredibly well. The peril in the book is incredibly real. There is an insidious force at work trying to stop Fisher from accomplishing his goals and this culminates in a spectacular battle in the end.

I am so glad I finally read this because my son is now almost exactly the right age for it and this is exactly the sort of story he goes for. YAY! (And thank you for the prompting, Sarah.)

Unknown said…
Another wonderful review. Thank you. I have ordered this from Australia! It will be interesting to see how long it takes to get here. :)
August 11, 2016 at 12:02 AM

Kim Aippersbach said…
This sounds AMAZING! An adventure with a robot and a woolly mammoth: what more could one ask for? Especially if the robot is snarky!
August 19, 2016 at 2:40 AM