September 01, 2016
I heard a little bit about Shadow Magic by Joshua Khan last year, but not much buzz since it came out. I'm curious as to why that is because, while not perfect, it is a book that kids will eat up like candy. Blurbed by Rick Riordan, Jonathan Stroud, Sarah Rees Brennan, and Cinda Williams Chima, it had some fairly lofty expectations to live up to and it for the most part it meets them. 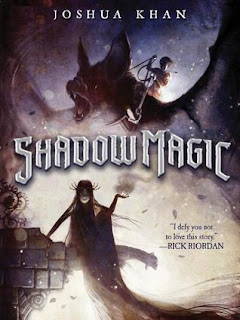 Thorn leaves home to find his father, who was condemned as an outlaw for something Thorn did. He is captured by slavers and bought by Tyburn. Tyburn is the executioner for the House of Shadow. Thorn finds himself in the country of Gehenna residing at Castle Gloom itself. He is a peasant who befriends nobility, becomes a hero, and shares an odd bond with a bat.

Lily Shadow is the new ruler of Gehenna following the death of her parents and brother. In one day she went from being a 13 year old girl who loved to run and play to the person on whom the weight of the kingdom rests. She is reluctantly fulfilling a betrothal contract that ended a centuries long war with the kingdom of Lumina. When it is clear an assassin is stalking Lily, she must count on help from Thorn to solve the mystery of her family's deaths and stand with her as she comes into her full powers.

Certainly there is a lot in Shadow Magic that is derivative of other works of fantasy. There is a lowly hero and an exalted girl in danger. There is a rugged mysterious man with a sword on a temperamental horse. There is an unlikely trio of friends who emerge to fight the danger. There are also zombie armies, ghost puppies, and an enormous ancient bat named Hades. So it has its own stuff going for it too. Most importantly it is one of those books that sells itself, that you can hand to any kid looking for something to read when they've run out of Harry Potter and Percy Jackson. The chapters are short and the action is fast paced. It makes the book hard to put down.

As regular readers of this blog know, I'm a character reader and I do think the characters are the book's greatest weakness. There are a lot of them. This in addition to the action means Khan had to rely on types a lot for what he was doing. Tyburn the executioner is never more than dark and mysterious. The villain is fairly one note. Gabriel, Lily's betrothed, is loathsome and whiny. He gets a little bit more than this as a character but not much. Even Lily and Thorn aren't as well developed as they could be, but I did really enjoy reading about them as heroes. Lily is haughty and prideful, but also compassionate and desperate for friends she can trust. Thorn is all attitude, but underneath it he is sympathetic and, as much as he'd mock it, honorable and brave. A young prince named K'leefe rounds out their trio. He is a hostage of Gabriel's father, a prince from yet another kingdom. His character is rather flat overall and mostly shows off the strengths of Lily and Thorn. However, he gets his own moments to shine too.

The world Khan created for the book is incredibly interesting and the way he presents it shows a lot of thought went in to it. He is one of those authors that is good at conveying the depths of his world building without feeling the need to explain it all. The kingdoms have a history that is fascinating and I find myself wanting to know more about all of them.

Also there is a giant bat named Hades with as much attitude as Thorn, which probably explains why Thorn is the only one who can ride him.

This book is just fun. It is a must have for all collections that cater to 5th-8th graders for sure. The book stands on its own but does have a sequel coming out next year entitled Dream Magic.

Brenda said…
I've had this on my radar as well, but hadn't heard much buzz about its release either. Glad to hear you enjoyed.
September 1, 2016 at 10:49 AM