December 08, 2016
I have mentioned several times before my penchant of reading a recommended book without actually ever looking at the synopsis. Such was the case with Insert Coin to Continue by John David Anderson. It was recommended and is a Cybils nominee so I just didn't bother. I assumed it was a book about a kid who gets trapped inside a video game. But that's not what happens at all. His life becomes a video game, and that's an interesting twist to the story idea. 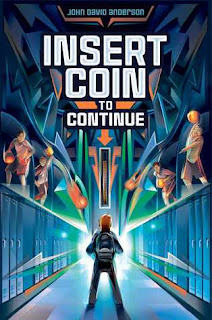 Bryan is a master at playing Sovereign of Darkness, his favorite video game. He's defeated it several times but he keeps playing because he is absolutely certain there is a secret hidden extra level after defeating the ultimate bad. One night all is effort and time are rewarded when it looks like he's unlocked it.....

Then his computer crashes.

Bryan wakes up the next morning to the words INSERT COIN TO CONTINUE flashing above his alarm clock with numbers counting down from 20. And he can't move his legs. Bryan inserts a coin on his nightstand into the mysterious slot on his alarm clock and begins the strangest day of his life. Every move he makes words appear in the air only he can see giving him points or taking them away. When he massively fails he has to insert another coin. As the day goes on, Bryan realizes he is going to have to keep playing until he defeats the real world "dark lord" and come out victorious in the game of middle school.

I liked the idea of this book when I originally thought Bryan found himself in a game of  middle school. I LOVE that his actual real life became a game. You may wonder at the difference, but for me it was a major one. The stakes somehow seemed higher as Bryan was moving through his actual day in the world he actually lives in with people who know him and who he will have to continue to interact with day after day. And honestly middle school doesn't really need to be amped up all that much to make the idea that it is a perilous game of life or death work. Let's face it. We've all been there. The game aspect adds a little edge to the things that already make a middle schooler's life hard: navigating crushes, choosing teams in P.E., school projects, quizzes, teachers who seem to have it in for you, bullies, reading Romeo and Juliet,  and DODGEBALL. Every middle grade reader will recognize all of these elements and appreciate Bryan's fear and humor in dealing with them.

The story takes place over the course of 24 hours and is fast paced. The reader follows Bryan throughout his entire day as he navigates his classes while his life hangs in the balance and his pocket change begins to run out. The book is laugh out loud funny in places and cringe inducing in others.

Bryan is a relateable character who is slightly awkward, but mostly an average kid. There is not a tremendous amount of character development done as this is just 24 hours and there is a lot of action, but Bryan's personality shines through well enough that I think young readers will identify with him. Bryan's best friend Oz is a great part of the story too. They have a realistic believable friendship and their interactions are the best in the book.

I think this is a definite must for all middle school libraries and classrooms (and upper elementary as well). For anyone who knows a kid stuck in the game of middle school, this book may help them through it.

Kim Aippersbach said…
I don't play video games, but for some reason it's a trope that works really well for me in books. I love the idea of life-or-death middle school.
December 8, 2016 at 6:03 PM

Brandy said…
Same here! But even I recognized the ones referenced here so that was fun!
December 9, 2016 at 4:22 PM