The Many Reflections of Miss Jane Deming

June 19, 2017
J. Anderson Coats' debut novel, The Wicked and the Just, is one of my go to recommendations for historical fiction. When I discovered she had a new MG book coming out this year, I couldn't wait to read it despite being unsure of whether the premise would work for me or not. It completely did though. The Many Reflections of Miss Jane Deming is excellent. 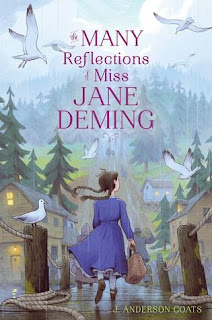 Jame Deming is not living her ideal life. Her father was killed in the Civil War and she lives with her incredibly young step-mother and two year old brother. She had to quit school at 9 to take care of her newborn baby brother while Mrs. D went to work in the Lowell factories. But now Jane has an opportunity for a new life. Mrs. D is taking them to live in Seattle, WA. They are going on a ship to start a new life. Mr. Mercer is taking a boat load of young ladies and some widows to the Washington territory. Jane has read Mr. Mercer's pamphlet so many times she nearly has it memorized. She can't wait to begin her new life, she only hopes that she has the heart and mind for it. As the journey unfolds and Jane adapts to her new life, she has to learn a lot about who she is, what is important, and how to be in her new life. One thing she knows for certain is that she wants to be a person no one ever refers to as a "poor dear" ever again.

Telling the story of the second group of Mercer girls to go to Washington Territory from the point of view of an 11 year old works really well. Jane's age gives access to the time period for a younger audience. It's also an interesting in to the situation from a modern adult perspective too, and I thoroughly enjoyed it. Jane has taken on a lot of responsibility for one so young, but none that was unheard of for a girl in her time. She is the primary care giver for her brother. She does this job incredibly well, but finds herself feeling resentful of her step-mother (understandably). Jane is smart and longs to continue her schooling. She has opinions, fears, hopes, and dreams that make her so incredibly REAL. As I was reading her story, I was struck by how much I felt like I knew her which speaks to how well Coats crafted her character. The book has many strong secondary characters too that see the potential in Jane in work to foster it. Being 11, Jane is in a position of not really being a Mercer Girl, but her responsibilities make her more than a child too. She struggles with always being in the middle and not having a real place. Yet the Mercer Girls treat her with care and compassion even as they get caught up in their own lives and passions. Once she's in Washington, Jane makes friends that bring out other aspects of her personality. Then there is Charles Wright, who Mrs. D ends up marrying. This man may be the most amazing father figure in all of MG fiction. I loved him to pieces. Each and every character in this book is memorable and impacts the story. I was further impressed by Coats' ability to write a two year old into the story realistically.

Jane's story begins in New York. The reader travels with her on the ship to San Fransisco and on to Washington. The last third of the book takes place in Washington is about Jane learning to be in the territory and adjusting to her new family set-up. What I really appreciated was how there was no added unnecessary drama as is often the case in historical fiction for children. The history itself is dramatic and compelling enough, and Jane's story is hard to put down in its authenticity. Her voice and personality carry the book so well. I also appreciated how Coats showed frontier life and how she included the Native people's struggles.

Westward expansion/settlement stories have never been a favorite of mine, but The Many Reflections of Miss Jane Deming is one I love. I highly recommend it. It definitely rises above most similar books and would be an excellent addition to school libraries and US history units.