The Emperor of Mars

August 07, 2017
Last year's Secrets of the Dragon Tomb by Patrick Samphire was one of my favorite novels of 2016. The Sullivan Family won a forever place in my heart. That place was only solidified by the recently released sequel The Emperor of Mars. 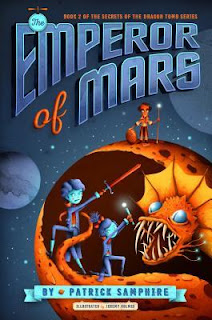 The Sullivan family has taken up residence in Lunae City since their adventures of the previous year. Freddie is back to work as a spy. Father is working hard at the museum creating an exhibit about the dragon tomb they unearthed and continues to invent. Jane and their mother are still tied up with society function. Olivia is missing Freddie, but finding much to occupy her time. Putty is being Putty, inventing things and coming up with ways to evade her new and unwanted governess (though this latest governess is a force to be reckoned with). Edward finds himself at loose ends. Now that he has realized his family doesn't need him to look after them quite as much as he thought, he is on a quest to find out what he enjoys and wants to do with his life. Then he meets a mysterious thief, discovers an old friend has gone missing, mysterious people have been making ominous inquiries at the museum, and a man seems to be shadowing their family. Suddenly there is another mystery to solve and an old nemesis returns to threaten the Sullivan family again.

Edward's character arc is a truly fascinating one. The first book found him struggling with the responsibility he has for his family and then discovering that they had more depths and strengths than he realized. This book has him struggling to find a place for himself in his suddenly new life caused by the family's move and his own shifting perceptions of everyone around him. As his story continues, he comes to more new realizations about his family, especially his sister Jane, that leave him feeling more out of place and confused. The family dynamics are what I appreciate most about these books and they are further strengthened in this story. Edward and Putty's relationship is put through harder tests in particular. Both of them are struggling in similar yet different ways. Putty knows what she wants but has to deal with others expectations being different from hers. Edward can't figure out what he wants to be, but everyone assumes he is fine and going along as always. Putty wants to be with Edward much of the time, but he his trying to find himself. The conflict between them is real and will feel familiar to anyone who has a close sibling.

There are a few new characters introduced and they are as wonderful as the old. Mina, a half-Martian half-Human girl, is my favorite of  the new characters. She has a great story of her own and a complicated history and motivations. She is certainly there to help Edward discover some things about himself, but she also has her own thing happening that is equally important.

This book is even more action-packed than the first, which is saying something. I continue to be impressed by the Samphire is able to have such action filled plots and do such incredible character building at the same time. It is a fast paced, quick read with plenty of peril, battles, and intrigue to satisfy any avid adventure reader. I appreciate the humor in this book too, which is exactly as subtle and snarky as I like.

If you haven't read Secrets of the Dragon Tomb yet, you should read that one first. Then you won't be able to help but read this one too. They are an excellent set to give to any young adventurer. I could read  a dozen more books set in this world and still want more.