October 23, 2017
Look! It's a review. I actually had enough time to read a whole new to me book and write about it. Things are getting back to a normal here, people.

I became a fan of N.D. Wilson's writing after the release of his very first book Leepike Ridge. I am an enthusiastic fan and pusher of both his 100 Cupboards trilogy and Ashtown Burials series. His latest book, The Door Before, is billed as a prequel to the 100 Cupboards, but it is also a prequel to the Ashtown Series as well. 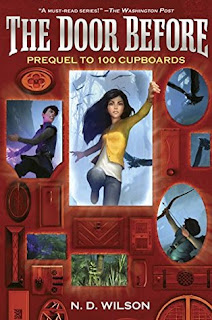 Hyacinth Smith has a gift. Her father refers to it as a green touch. Hyacinth just knows she can coax life from growing things making them larger and bigger-giving them the power to reach their full potential. Hyacinth's family has always traveled around, staying in other people's homes and doing odd jobs. Now they finally have a home of their own, but the family is splitting up. Her older siblings are going to a special camp for children in the Order her parents are a part of. Her parents are going to an important meeting for that same Order. She is being left (along with her younger brother) at the new house, which is currently occupied by an odd great aunt who is cultivating a field of lightning struck trees. It turns out Granlea has been trying to open doors to other worlds and is responsible for letting in an ancient evil force. She also let in two boys determined to face off against that evil. Hyacinth teams up with these boys as they all desperately try to survive and keep the evil from spreading.

Hyacinth has a quiet strength and calmness about her that helps her get through even the toughest of situations and hardest of times. She is often scared and terrified, but she is good at persevering. Readers of the 100 Cupboards trilogy will recognize this in her, as it is the same quiet strength matured by age she has in that trilogy. Family is fiercely important to Hyacinth and she loves her siblings as much as she loves to be quiet and observe the world around her. She is a main character whose life and mind it is easy for a reader to slip into and assume. Her interactions with Mordecai and Caleb upon meeting them are interesting. I thoroughly enjoyed Caleb's humor, wit, and common sense. (Again, traits we see matured but still there in his later life.) It was slightly more difficult for me to get a real handle on Mordecai. He is full of angst and a healthy dose of a martyr complex for sure. He seems to change his mind about  Hyacinth awfully fast and for little reason I could see except the plot required him to start trusting her. I also felt like there wasn't enough relationship development between Mordecai and Hyacinth in this book to justify Caleb's comment at the end that Mordecai was keeping Hyacinth near for himself and not for her. Readers of Wilson's other books know that they obviously eventually develop a close relationship as they are the parents of the hero of the 100 Cupboards books, but taking this book on its own, it didn't make sense.

The plot of The Door Before is fast paced. There is a lot going on and the scenes jump quickly from one to another with a lot of action and peril. Nimiane is full of rage and anger over the loss of her eyes and bent on avenging herself on Caleb and Mordecai. The Smiths happen to be in her way so she will crush them too because she can. Nimiane is truly great villain in every sense of the word. She always has been, but here you get to see her prior to her years of entrapment full of rage, power, and with an organized force. It takes everything the heroes have to hold her back and attempt to stop to her.

This is the shortest of Wilson's books in either the Cupboards or the Ashtown series and it relies quite heavily on world building already accomplished in both. The Order isn't really explained and the references to Henry, Kansas might be a tad confusing to any reader who is starting with this book. That being said, I do think it can be read and enjoyed on its own. You don't have to fully understand the Order to see what it does and how messed up it is in this book. You may question why the author cared enough about this random town to actually mention it specifically, but it won't throw you out of the story. If it's read first, it should lead to readers to the other two series. And then it would be fun to go back and look at it with fresh eyes and all that combined knowledge.

If you've already read the Cupboards Trilogy and the Ashtown Burials, you definitely want to read this too. It's an action filled, satisfying story that gives some insight into the past and there are a lot of cameos from characters you know and love you will appreciate.

Kim Aippersbach said…
Wait, 100 Cupboards and Ashtown are in the same multiverse?? (I think my question just answered itself. But I had no idea!) Should I have recognized this? I want to reread both series now!
October 31, 2017 at 8:23 PM

Brandy said…
There wasn't an indication they were before this, but YES! And actually Cyrus and Henry are first cousins. Henry's mom (Hyacinth) is a Smith. She's Cyrus and Antigone's aunt.
November 7, 2017 at 7:07 PM