November 06, 2017
If Jason Reynolds writes it, I'm going to read it. Sooner rather than later. I made a special trip to the bookstore just so I could buy his latest, Long Way Down, because I didn't want to wait even a little bit for it. It was worth the trip and money a thousand times over. My only regret is that I don't have a class full of teens to read and discuss it with at the moment. 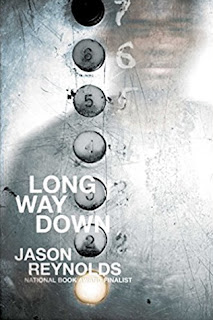 Will is 15 and his brother is shot right front of him. It's not the first death Will has seen and he knows the rules.
1. Don't cry.
2. Don't snitch.
3. Get revenge.

The next day Will sets out to find the person he knows is responsible for Shawn's death with Shawn's gun tucked in to the back of his pants. He gets on the elevator with a hazy plan in his head and a determination to follow rule three the same way he followed one and two. But the elevator stops on every floor and each time a person gets on. A person Will knows but who shouldn't be on that elevator because they're dead. And with each new person comes a story and a question:
Is the gun even loaded and do you know how to use it?
What if you miss?
What if you get the wrong guy?
And it goes on. All the way down.

Whoa this book is intense. The story is told in blank verse, which helps in ratcheting up the tension, but also works really well to move the pace along. It's a book you don't want to put down, and its format actually allows for fairly easy reading in one sitting. I did in two due to circumstances, but the second time I knew I would finish before I got up again. Reynolds has a way with creating characters and community that get under your skin and stick with you long after the book comes to an end. Will and every person who walks on to that elevator does just that. This is a book that examines family connections, assumptions, violence, and cycles. The way Reynolds uses his words is careful and precise. Each one finds a target. I felt so much for Will especially. So. Much.

And that's pretty much all I'm going to say. This is a book that needs to be experienced. It's the sort of book that is going to have you thinking long after you shut it. If you are lucky enough to be involved in a group discussion of it, it will be one heck of a discussion.