April 20, 2018
I debated whether or not I was going to write a full review for Crossing Ebenezer Creek by Tonya Bolden or just include it in one of my shorter musings posts. It's a hard book to discuss because there is a lot the reader just needs to experience. In the end, I decided to write a full review simply because it was one of those books that kept me thinking for days after I finished it. 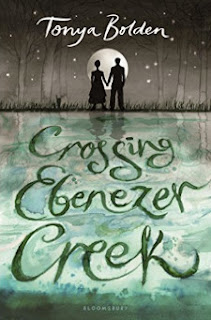 Mariah is a slave who longs for freedom. When a contingent from Sherman's army shows up at the plantation she is on to procure food and supplies, she jumps at the chance to leave with them. Caleb was born free and works for the army driving a cart and helping with supplies. He offers Mariah and her brother a ride in his wagon. There are many former slaves who have joined Sherman's march to the sea as it makes its way south. Mariah and her fellows from her plantation find their place among them, offering the skills they need. Caleb helps them adjust an gives them as much help as he can. He finds himself continuously drawn to Mariah, her brother, and the people she is close with. Mariah and Caleb hesitantly begin to have hopes for the future despite the tragic harshness of both their pasts. But things are not perfect with the Union Army either, and there are many, even those in power, who don't want the former slaves with them.

The book shifts between the perspectives of Mariah and Caleb. Both are in their mid to late teens, but they read older as the lives they are living are fully adult lives. Both are characters you can't help but grow attached to as they tentatively explore the possibilities of a future where the Union has won and slavery is no more. It is tentative because they still deal daily with the how white people view them as lesser. Aside from the Captain running the contingent Caleb works with, many of the officers do not treat the former slaves well and they allow their subordinates to do what they wish. Mariah is solely responsible for her younger  brother and also helps take care of an older woman from her plantation who is quickly deteriorating. Both Caleb and Mariah are allowed to be whole people. I loved how Bolden showed the vastness of their anger, fear, resentment, and bitterness toward all that had happened to them.

The plot covers the march from shortly after the burning of Atlanta to the crossing of Ebenezer Creek. (That crossing is a historical incident I didn't know about prior to the release of the book so I would say the book is worth reading just for that.) The reader gets a clear view of the Union army from the perspective of a former slave and it is interesting. The book is short (around 200 pages) and it was difficult for me to put down. Yet I wasn't riveted by the plot so much as Mariah and Caleb themselves.

Crossing Ebenezer Creek is not an easy book to read nor is it a happy one. If you do know why Ebenezer Creek is important then you know why. Bolden also doesn't shy away from the dangers the women on the march faced, both from their former lives and from the soldiers on the march. The way this is referenced may go over many heads, but it is there. My library has it shelved in the J shelves, but it is definitely one of those books that straddles the MG/YA line. If it were me, I would probably shelve it as Teen, but it would well work for a middle school library.