The Lost Books: The Scroll of Kings

June 12, 2018
Sarah Prineas writes amazing books and I love and own them all. There are more than one copy of most of them in my house because my kids loved them too and need their own copies. I often get nervous when I read a new book from an author whose books I adore because there is the niggling worry that this will be the one I don't like. I'm becoming more and more convinced that's just never going to happen with Sarah's books. Her latest The Lost Books: The Scroll of Kings had me riveted from page one and made me feel real, true, unadulterated love for a book. Something I haven't felt in quite a while.

Disclaimer: This is a review of an early copy sent to me by the author who I am friendly with.

That was what a librarian was, he realized, and he wanted to curse himself for being so slow to figure it out. A librarian was not just a cataloger, a sweeper, a duster, a collector of grass, an alphabetizer, a keeper of keys. A librarian was a protector. Of books. 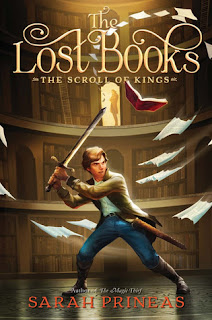 Alex is a Librarian. He knows it deep in his heart. He has known it since the day he found his way into his father's library and began to read the Red Codex. As he read, the words marked him and he has never been the same. Alex's problem is convincing everyone else he is a Librarian. His father wanted him to be a soldier. The Librarian he apprenticed for did little to train him. When Alex finds that Librarian dead, Alex knows the book the man was reading at the time is responsible. Then Alex discovers a letter revealing the Royal Librarian died in similar circumstances. Alex travels to the Winter Palace pretending to be his dead master to take up the mantle of Royal Librarian and the mystery surrounding the deaths. Alex knows books are full of life. He knows they can be dangerous. The young queen, Kenneret, is not impressed with Alex but gives him a trial period to work in her library knowing she can easily get rid of him at the end of this time. She has more important things to deal with including her delinquent brother who has been kicked out of yet another school, her uncle who seems constantly disappointed in her, and the weight of ruling a nation of people on her young shoulders. When the dangers in the library and the dangers in the palace appear to be intertwined. Kenneret and Alex have to work together to solve the mystery that is threatening the books, their lives, and the fate of the Kingdom.

This book is so perfect for me it is rather hard to be objective about it. Alex is a snarky, rather arrogant, smart yet often oblivious boy. I mean. Check one on the list of things I love. Kennie is a prickly, pragmatic, determined and ambitious girl. So yeah. The two main characters of this book are my everything. There was no chance I wasn't going to love this. I wasn't also expecting to love Kennie's younger brother Charlie equally as much. He is a strong, soldier type, but a deep thinker who sees nuances Alex and Kennie miss in their more no-nonsense approach to everything. The three of them make a fantastic team once they manage to come together. The process of them dancing around each other to get there is fun too. So much snark.

The plot is well crafted and the action moves along at a brisk pace. I was not able to put this down or stop reading for even a minute until I was finished. The mystery of the books and what was happening with them was compelling as was the political intrigue part of the story. I was particularly impressed by how this part was there, but on exactly the level it needed to be for the intended MG audience. I'm not going to say much more to avoid spoilers, but this is definitely a page turner full of adventure, excellent dialogue, and plenty of action.

Of course, being me, I also appreciated the theme of the importance of books, reading, and the role librarians play. The fact that the books in this story are in danger while being a danger at the same time was quite brilliant.

I'm looking forward to book talking this one in the upcoming school year. It is one of those books that will be easy to spark kids' interest in.

Brandy said…
It's so much fun!