May 15, 2019
Begone the Raggedy Witches by Celine Kiernan is a 2018 release that wasn't on my radar at all until I saw it reviewed by several friends in a short span of time. The reviews were all stellar, and the reviewers of such similar reading tastes to mine that I bought the book since my library didn't have it. Well, I finally got around to reading it, and I have zero regrets and a lot of love for this amazing new MG fantasy trilogy.

"Fear is a very effective weapon," said Fírinne softly. "And the queen uses it to its fullest capacity. Eventually we become anything she wants us to be, just so she'll leave us alone. But I don't want to live like that anymore. I don't want to go on forgetting that in my youth I danced colour up out of the ground and sang the stars ashiver, just for the joy of it." 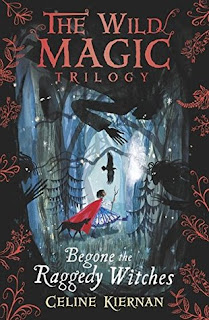 Mup has always lived a fairly well ordered life because she follows her Aunty's rules to the letter. What Aunty says to do, must be done. Aunty always said Mup was to tell her the instant she ever saw a witch hanging about. On the night Aunty dies, the witches arrive in full force. They are there to take Mup's Mam. Mup bravely fights them off with the help of Aunty's spirit. When it becomes clear that someone has taken Mup's father, Mam, Mup, and Mup's little brother Tipper break all of Aunty's rules to try to get him back. Venturing into the world from where the raggedy witches come, Aunty, and Mup's mother come from, they are determined to succeed in their quest even as Aunty's fading spirit whispers dire warnings in their ears. However, they aren't entirely sure who took him. Was it the witches? Was it any number of political rebels ready to put Mup's Mam on the throne in place of her cruel, tyrannical mother who is the current queen? In a strange world where magic abounds, everyone wants something, her Mam does not act entirely herself, and her brother can turn himself into a dog, Mup must find the courage to do what is right and stand by her convictions.

Mup is such a delightful heroine. She begins her begins the book as a sheltered, rule-following, and seemingly meek little girl. As danger upon danger meets her, Mup discovers a core of strength and defiance in herself that serves her well. She has strong convictions about what is right and what is wrong. As much as she loves both Mam and Aunty, she is willing to defy them both in order to do what she believes is right. Through Mup's eyes, Aunty is able to see the mistakes she made and the things she could have done better for the people she left behind when she escaped her sister's cruel world. Mup is a tether to Mam keeping her grounded as she has to navigate the world she left as a child and the full force of her magic for the first time. Mup also has to contend with magical powers she was unaware she possessed. After all, her father is Nigerian, and she grew up in Ireland. Who knew she could make lightning with her hands? She had no idea she could even do magic until they entered the world her grandmother rules. Upon arriving in this strange world, Mup immediately meets Crow. Crow is Mup's catalyst for defiance and rebellion. She has a deep sense of empathy and feels strongly for his plight. The more she learns about him, the more determined she becomes to help him too. Crow is broken, angry, and mostly abandoned. His father was arrested. His mother severed all ties with him. His uncle cares for him, but also lives a life of fear and desperation always trying to keep one step ahead of the queen's witches. And Crow is determined to defy the witches at every turn. Together, Mup and Crow are a scared but sassy and defiant team ready to take on whatever evil they have to face in order to save those they love.

Kiernan's prose is excellent in every way. She has a gift for story telling and weaves her words like magic. I don't know enough comprehensively about Irish folklore to know if this is based on any specific portion. It does have the feel of being imbued with old and lasting stories though. Then there is the political intrigue portion which Kiernan balances phenomenally well. It is exactly the right amount for the intended audience. Kiernan is exploring some extremely important and necessary themes. When does one submit and when does one rebel? Is it better to be safe or stand for what is right? If you don't speak up when you see wrong being done, who will? All of these questions are explored while also keeping to a quick paced, adventure filled plot that is full of action and conflict.

I highly recommend this to lovers of fantasy, mythology, and well-told stories of any age.

Jenna @ Falling Letters said…
This was also a book that wasn't on my radar at all until I saw friends praising it in their reviews. At the time, my library didn't have it either so I put a purchase request in. I've checked it once but didn't read it ^^; Your positive review reminds me to give it another shot!
May 27, 2019 at 7:02 PM