Sal and Gabi Break the Universe

March 17, 2020
I've been trying to read as many books from Riordan's imprint with Disney Hyperion as I can, though they're coming out so fast it's hard to keep up. I just love the concept of a whole imprint for own voices mythology books. Sal and Gabi Break the Universe by Carlos Hernandez is my favorite one so far, which is interesting because it is not mythopoeic at all but science-fiction. 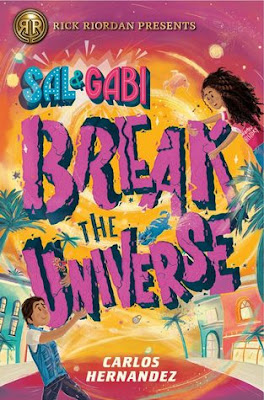 If there is one thing Sal Vidon knows how to deal with, it's bullies. As a new kid, he knows he needs to be proactive when the school's biggest bully comes for him during his first week at school. One raw chicken in a locker later, Sal finds himself defending against accusations of witchcraft thanks to the interference of student council president Gabi Real, who showed up in the principal's office as the defense attorney of Yasmany. Sal prides himself on being a great magician, but he uses manipulation and sleight of hand-not actual magic. Except he has a talent few others could even imagine. Sal can rip holes in the Universe and pull things from parallel worlds. In order to escape the confrontation with Yasmany, he pulled in a raw chicken from another world. Unfortunately, ripping even a small hole in the Universe has consequences, and often Sal doesn't just pull in chickens-he pulls in different versions of his dead mother from other realities where she is still alive. Only he promised his dad and stepmom he wouldn't do that anymore. When after summoning the chicken a different version of his mom shows up without him trying and the hole he opened won't close, Sal realizes he might be out of his league this time. Added to that,  Gabi Real is the smartest most persistent person he has ever met-and she can see the hole he ripped. While trying to fix what he's broken, Sal learns how to see people better, learns some things about the complexities of people and relationships, discovers how good it is to be part of a team, and realizes how family can mean many things and comes in different shapes and forms.

If you've eve wondered what would happen if a textbook Slytherin and a textbook Ravenclaw (both with strong Hufflepuff tendencies) became besties and teamed up to take on the world, this book is that. Sal is snarky, too smart for his own good, charmingly manipulative, and determined to be the best. Gabi is a logical but creative thinker, persistent, curious to the point of reckless, and determined to know everything there is to know about her world and the people in it. Both Sal and Gabi have a fierce loyalty to the people they consider "theirs". As their story unfolds, that loyalty begins to extend to each other and each other's people. The story is told in Sal's first person voice, so we know more of his internal thoughts and motivations. However, Gabi is just as real and fully developed a character. Together they are one of the best teams I've come across in a MG book in quite some time. They go from adversaries to reluctant allies to best friends. Their relationship is well developed, and the reader gets to see its natural progression. Both of them have hard things in their lives, and both of them have good families who are there for them, but they find a balance in each other that is unique. From each other they learn what their weaknesses are and how to try to turn them into strengths. Sometimes the lessons are painful. Sometimes they don't fully stick. But Sal and Gabi discover facing the world with someone of equal intelligence and ability at your side who understands loyalty and its importance is far better than facing it alone.

The book has a tremendous supporting cast who are fully developed and important as well. Yasmany is not your typical bully. His relationship with Gabi and the way his relationship with Sal evolves is layered and full of nuance. Sal's parents are amazing. His relationship with his stepmom is so well done. The amount of affection and respect they have for each other is evident in every interaction, while Sal also struggles with desperately missing his mom. He wants to live in a world where he has all three of his parents but is slowly realizing how impossible that is. Gabi's family is big and unconventional. It's also full of all the love and support any kids want to grow up in the center of. Gabi knows she is lucky. As the plot unfolds, Gabi and Sal bring their unique families and friends together to form a strong community. At its core that is what this book is truly about-the power of community.

Also it is interesting to find a MG book where every single adult well drawn and working hard for the good of the children. Sal and Gabi aren't out there taking risks because the adults have abandoned them or their responsibilities. They're out there taking risks because they're know-it-all middle schoolers who think they're grown enough to handle it. If that isn's some realism injected into your MG SFF, I don't know what is.

This book is tackling a lot, but it is well-balanced. The characters are so likable and realistic that it is incredibly easy to just fall into the story. I'm definitely going to be reading the next book in the series as soon as it comes out!

Jenna @ Falling Letters said…
I haven't been able to get into any other Riordan/Riordan Presents but I did love this one! it seems quite different from the other titles so I think it's a testament to how strong this book is that it's your favourite.
March 27, 2020 at 6:17 PM

With Prof. Mrs. DOROTHY LOAN INVESTMENTS. you can say goodbye to all your financial crisis and difficulties as we are certified, trustworthy, reliable, efficient, fast and dynamic
January 22, 2022 at 3:49 AM