October 17, 2011
The Flint Heart is a "freely abridged" version of a story written by Eden Phillpotts. Katherine Paterson  and her husband, John Paterson, did the abridging. Katherine Paterson is a beloved by me (and many others) author so I was naturally intrigued. Add to that I had heard buzz long before the book came out that John Rocco's illustrations for it were beautiful. Rocco's illustrations are indeed beautiful and the best thing about the book. The best thing by far because they were they only thing about the book I actually enjoyed. (They are very beautiful color illustrations and I'm sad they were wasted on this story.) 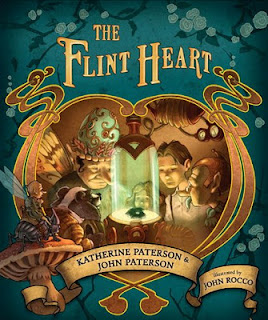 Synopsis (from Goodreads):
An ambitious Stone Age man demands a talisman that will harden his heart, allowing him to take control of his tribe. Against his better judgment, the tribe’s magic man creates the Flint Heart, but the cruelty of it causes the destruction of the tribe. Thousands of years later, the talisman reemerges to corrupt a kindly farmer, an innocent fairy creature, and a familial badger. Can Charles and his sister Unity, who have consulted with fairies such as the mysterious Zagabog, wisest creature in the universe, find a way to rescue humans, fairies, and animals alike from the dark influence of the Flint Heart? This humorous, hearty, utterly delightful fairy tale is the sort for an entire family to savor together or an adventurous youngster to devour.

Looking at that last sentence I have to say that the youngster in question would have to be very young indeed. Except the language of the story is rather prohibitive for the very young. I can see this best being enjoyed by adults who like Victorian fantasy. (But even then....)  I love Katherine Paterson to pieces but I really have to question why she wanted to abridge this story in the first place. I am not at all familiar with the source material so I went into this with nothing more than the information in the synopsis. This is one of those absurdly quirky fairy stories which is not my cup of tea. I don't like my fairies to frolic and flitter about. I may have been able to get past that as I really enjoyed the first two chapters and the idea of the flint heart. I may have even been able to get past how the story journeyed far far away meandered away from the point at times. Might have. If it had not been for the introduction on page 124 of the walking talking hot water bottle as a character. Yes, you read that correctly. A walking talking hot water bottle. Seriously. This hot water bottle is actually a rather important character too. That was it for me. I skimmed the rest of the book but there was no recovering any enjoyment at all from it for me after that.