Tuesdays at the Castle

October 25, 2011
Anyone who is a fan of magical kingdoms and heroic princesses pay attention. Jessica Day George's new novel Tuesdays at the Castle is a must read. It is a story of peril, adventure, magic, and heroism that will greatly appeal to any young (or possibly not so young, as in  me) lover of fantasy. 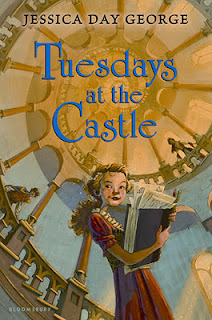 Synopsis (from Goodreads):
Tuesdays at Castle Glower are Princess Celie's favorite days. That's because on Tuesdays the castle adds a new room, a turret, or sometimes even an entire wing. No one ever knows what the castle will do next, and no one-other than Celie, that is-takes the time to map out the new additions. But when King and Queen Glower are ambushed and their fate is unknown, it's up to Celie, with her secret knowledge of the castle's never-ending twists and turns, to protect their home and save their kingdom.

Celie is a great little heroine. The youngest of four children she is beloved by everyone in the kingdom, particularly the Castle. This has not made her spoiled though, she loves everyone in return, particularly the Castle. In the beginning Celie relies on her older brother, Rolf, and older sister, Lilah to come up with a solution to finding their parents and ousting the traitors trying to take over their kingdom. She relies on the Castle too. However, it soon becomes clear that the Castle for whatever reason can only do so much and Celie, who has taken the time to study the Castle, is the one with the required knowledge to help her siblings and saver her kingdom. The way she goes about this is inventive humorous. What the royal siblings do to try and scare off the interlopers are childish, one involves manure, but as their leader is a child it strikes exactly the right tone.


The Castle is almost as delightful a character as Celie. And it is a character, not just a building. You have to give a Castle that chooses the next King, allows in flocks of sheep to chew the tapestries, lets undeserving captives out of prison cells, and gives nasty dank rooms to unwanted "guests" the status of character. The magic of Castle Glower isn't explained and doesn't need to be, it simply is.

On top of being a book about magical kingdoms and princesses, this is also a sibling story. I always enjoy a good sibling story and this is certainly a good one. Celie, Rolph, and Lilah are all very different but they work together and care for each other. The other residents of the Castle all add to the delightful cast of characters that make the story as magical as it is. Some are quirky, but none so much that the story becomes eccentric. Everyone works together to bring about the resolution but it is Celie and Castle Glower who shine as the heroes.


According to Jessica Day George's website this is going to be the first in a new series (Bit is going to be so excited, she is already eagerly anticipating reading this one) and is available for purchase as of today!


The version I read for review was an ARC received via Netgalley.

Allison said…
I have been really into MG lately, so I think I'm definitely gonna have to pick this one up. It sounds so cute! I'm not sure about the immaturity as far as manure, etc goes trying to trick people - but like you said, they're young!
October 27, 2011 at 2:21 AM

Brandy said…
They are young and were rather sheltered from the big cruel world until this happened so they do the best they can. It is a lovely story, the castle is wonderful and the writing superb.
October 28, 2011 at 1:22 PM