January 31, 2012
I have been torn about reading Death Cloud by Andrew Lane for some time. On the one hand, it is about a  teenage Sherlock Holmes. On the other hand, the cover is highly mockable. I wouldn't be caught in public with this book sort of mockable. It makes it difficult to take the contents seriously. Then I saw a favorable review from a friend on Goodreads and decided to overcome my being content with chortling over the cover (the UK cover is so much better). I'm glad I did because this is an excellent example of YA historical fiction, a true honoring of the original character, and a fun mystery adventure story. 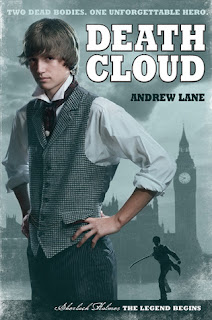 Synopsis (from Goodreads):
It is the summer of 1868, and Sherlock Holmes is fourteen. On break from boarding school, he is staying with eccentric strangers—his uncle and aunt—in their vast house in Hampshire. When two local people die from symptoms that resemble the plague, Holmes begins to investigate what really killed them, helped by his new tutor, an American named Amyus Crowe. So begins Sherlock’s true education in detection, as he discovers the dastardly crimes of a brilliantly sinister villain of exquisitely malign intent.


Sherlock Holmes is such an iconic character that I have to admire those who take him on and do it well. Andrew Lane has done it well. In this story you see the beginnings of the man who will be the great detective and the influences that formed him. I really really liked young Sherlock. He has a keen and intelligent mind but it is not fully trained. For that he has an excellent tutor who forces him to question, observe, think before judging. In his tutor's lessons fans of the original stories can see much of the tactics employed by Holmes, the detective. At the same time this young version of Sherlock is realistically young. He is insecure and unsure of himself. As someone who has read most of the original stories I enjoyed most of the hints of things to come. At the same time I can see a person who had never read those stories finding enjoyment in this developing character as well, even if they don't know to what it is all leading. This made me a little sad: Laudanum. Remembering the strange dreams that he'd had after he had been drugged, while he was being taken to France, Sherlock felt a twinge of-what? Melancholy, perhaps. Wistfulness. Surely not...longing? Whatever the feeling was, he pushed it away. He'd heard stories about people becoming dependent on the effects produced by laudanum, and he had no desire to go down that route. None at all. Poor Sherlock. I have to confess I did miss the presence of Watson. I don't know that I had realized how full of an impression he makes on the stories before, but not having him there made me notice. Sherlock does have two other friendly sidekicks, one of which is a lovely girl who Sherlock most definitely has more than friendly feelings towards.

All in all this book is good fun whether your a fan of the iconic detective or just interested in mystery set in Victorian England. This is the beginning of the series. There are currently four books out in the UK (with lovely intriguing covers). The second book will be released in the US in April under the altered title, Rebel Fire (can we please get better covers here?).

April said…
ooh I'll have to read this! P.S. The BBC TV show is awesome. Priorities when you come stay with me: 1)Take Care of Baby 2)watch Sherlock and 3)Play Lego Harry Potter on the Wii
February 6, 2012 at 10:18 PM

Brandy said…
Fortunately the baby will be small and unaware enough we can do the first one while doing either of the other two. I can teach you the most important skill of motherhood: MULTITASKING.
February 7, 2012 at 8:10 PM