Most Anticipated 2012 Reads AND a Challenge

January 01, 2012
It looks like another great year of reading is starting. There are several books coming out this year by authors I fell in love with in 2011 and I am excited for new installments in several series I enjoy. Here are some of the books I'm most looking forward to.

Winterling by Sarah Prinneas (January)
I love the cover. I love the premise. I read Prinneas's Magic Thief books this year and adored them so I am very  much excited to get my hands on this one. Here is a very enticing book trailer you can watch to raise the excitement level even more.

The Fault in Our Stars by John Green (January)
If you read the synopsis of this book you kind of have to wonder how anyone could say they were excited about reading it. (Although masses of people are.) It is most likely going to be gut wrenching and heart breaking. But it is John Green so it will also be humorous and probably awesome. (I confess the only other John Green I've read is Looking for Alaska so I can not be counted as one of his super loyal fans, but I so admire the way the man writes. I should really get on reading his other books this year too.)

I have been wanting to read this book since it was released in Australia and the blogoshpere lit up with reviews on its awesomeness. It is finally releasing in the US this year and I am looking forward to experiencing it for myself. And while I loved the simplicity of the Australian cover, I very much like the new US cover as well.

Swift by R.J. Anderson (March-UK)
I adore Anderson's Faerie books and Swift is the most recent installment. This takes the story to a new location and follows a new character, Ivy, a faery born without wings who longs to fly like her fellows.

This book is the one I am anticipating the most. I can not tell you how eager I am to get my hands on it. The Coming of the Dragon was one of my favorite reads of 2011. (I actually read it twice.) I have been waiting for this book since I reached the end of that one and realized that there was so much more to the silent Hild than there appeared to be. I dare you to read that book and not desperately long for her story just as much. Also, I love the beauty in the ideal of a Peaceweaver, and all the harsh complexities that are the reality of it. Plus that cover-oh oh oh.

Renegade Magic by Stephanie Burgis (April)
Already released in the UK under the title A Tangle of Magicks, this is the second installment of the Kat Stephenson books. I read the first one Kat Incorrigible when it came out. Twice actually, because I read it aloud to my daughter. I have a feeling I will be doing that with this one as well. Bit really likes Kat.

The Drowned Vault by N.D. Wilson (September)
This is the next installment of N.D. Wilson's Ashtown Burials. The first book, The Dragon's Tooth, was a 2011 favorite too. I am also excited to see what the cover for this is going to look like.

Crown of Embers by Rae Carson (October)
I really enjoyed Girl of Fire and Thorns and am interested to see where Carson is taking the story in this second volume. Again, another cover reveal I'm looking forward to.

We are also supposed to get the sequel to Shannon Hale's Princess Academy this year. There isn't an official date on that one yet though. (Or title.) I am thrilled she wrote a sequel as it wasn't something I was expecting, and it will be great to revisit those characters and see how they are getting on. 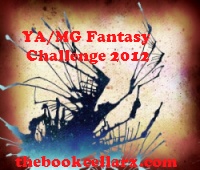 2012 will be the year I'm going to participate in my first challenge. Granted, I am starting out way easy. This is one that won't be so difficult for me. The Book Cellar is hosting a 2012 YA/MG Fantasy Reading Challenge. You can find out the information about it here. Even if you don't want to participate in the challenge Erica has compiled a great spreadsheet of all the YA/MG Fantasy book coming out in 2012. It is a wonderful resource if you like the genre.

Charlotte said…
I signed up for that challenge too, which was kind of like signing up for a challenge to brush my teeth every night....I've already read one--Winterling, which I bet you will enjoy a lot!
January 1, 2012 at 8:14 PM

Brandy said…
I saw that you had signed up too Charlotte. I can't wait for Winterling to get here. Bit came in while I was watching the trailer and she is very intrigued as well so it might be one I'm doing this year as a read aloud too.
January 1, 2012 at 9:30 PM

Chachic said…
So excited for you to read Graffiti Moon! I hope you enjoy reading it just as much as I did. I really should bump up Rebel and Arrow on my TBR pile so I have an excuse to buy Swift. Also looking forward to John Green's latest even though I've only read one of his books (An Abundance of Katherines).
January 1, 2012 at 10:04 PM