March 14, 2013
Audrey Wait! by Robin Benway came to my attention when Chachic and Heidi read it together and both wrote reviews of it. It sounded like one of those fun stories just perfect for when you had a bad week and need a good unwinding book. It was exactly that and I'm so glad I had it on hand when I had such a week. 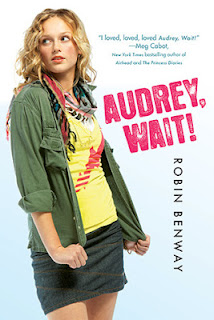 California high school student Audrey Cuttler dumps self-involved Evan, the lead singer of a little band called The Do-Gooders. Evan writes, “Audrey, Wait!” a break-up song that’s so good it rockets up the billboard charts. And Audrey is suddenly famous!
Now rabid fans are invading her school. People is running articles about her arm-warmers. The lead singer of the Lolitas wants her as his muse. (And the Internet is documenting her every move!) Audrey can't hang out with her best friend or get with her new crush without being mobbed by fans and paparazzi.
Take a wild ride with Audrey as she makes headlines, has outrageous amounts of fun, confronts her ex on MTV, and gets the chance to show the world who she really is.

Yes this book requires the reader to suspend disbelief from the beginning. You need to know going in that this is a situation that would most likely never happen. It isn't completely out of the realm of possibility though. Just because it never has happened doesn't mean it couldn't. I appreciated the way Benway unfolded the story. While the idea that someone could become famous because a song was written about them might be a little far fetched everything that follows from that makes sense and none of it overly dramatic.

I think I liked this so much because Audrey is a believable character and I really liked her. I could relate to how she felt about music. (I may have damaged some speakers due to loud volume levels in my life once or twice. At least.) I really liked her enthusiasm for life and her honest straightforward personality. She is portrayed in a realistic way too. She is naive in  many respects and acts exactly like a 16 year old, which is refreshing. I also enjoyed her relationship with her friends, Victoria and Jonah. James, her new boyfriend, is also wonderfully realistic and completely adorable. I found the way ex-boyfriend Evan was portrayed to be refreshing as well. I liked what Benway did with that whole scenario.

Basically this book gave me everything I wanted from it, a lovely fun romp of a read.

Note for Concerned Parents: There is quite a bit of strong language used and there are references to sex and drugs.

Anonymous said…
Oh I didn't know you decided to pick this up because Heidi and I read it together. Looks like you ended up enjoying this one even more than I did. I'm glad you had a good contemporary YA novel to read when you felt like you needed one.
March 16, 2013 at 1:33 AM

Brandy said…
Your reviews convinced me that it was the type of light-hearted YA I would enjoy. Thanks for that!
March 16, 2013 at 2:43 PM