March 20, 2013
I am always excited when a new princess tale comes out. I unashamedly love them. Garden Princess by Kristin Kladrup is a lovely new addition to this genre. 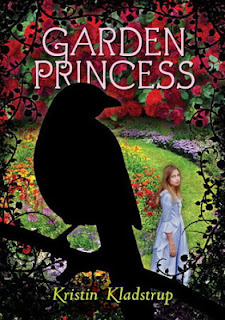 Princess Adela is not a typical princess. She’s neither particularly beautiful nor particularly graceful, and she’d rather spend her days digging new plots for her garden than listening to teatime gossip. But when her friend Garth is invited to a garden party hosted by Lady Hortensia — whose beauty is said to be rivaled only by the loveliness of her gardens — Adela can’t resist coming along, even if it means stuffing herself into a too-tight dress and donning impractical shoes. But the moment Adela sets eyes on Hortensia’s garden, she knows something is amiss. Every single flower is in bloom — in the middle of October! Not only that, there is a talking magpie flitting about the garden and stealing the guests’ jewels. Is it possible that Hortensia is a witch and the magpie an enchanted prince? And what of the flowers themselves? Will Adela get to the root of the mystery and nip trouble in the bud before it’s too late?

Garden Princess has an old fashioned fairy tale feel to it. There are enchantments that most be broken and an evil witch who must be defeated. Adela is not an average fairy tale princess though. She is not beautiful or graceful and her greatest love is making things grow in her garden. She doesn't have much interest in courtship or marriage. At least not yet. She wants to explore the world and see as much as she can first. Adela is accessible and sympathetic from the beginning. Through a bit of luck she is able to discover what Hortensia is doing with the guests invited to her garden party and realizes that if something is going to be done she must do it. I loved when she realized she wouldn't be rescued and had to rescue herself and set out to do that. She does with the help of a Magpie-who is actually an enchanted thief named Ned. I love when a story has a noble thief so this was an added bonus for me. Ned is a wonderful character and I really liked how realistically clueless he was a Magpie, and how Adela began to rekindle his human thoughts and emotions.

The rushed and somewhat sudden nature of the romance kept me from enjoying this as much as I otherwise might have. I also felt that Ned's actions after leaving the garden made little sense. I understand he was feeling insecure after what Hortensia did to him and that he wanted to find his mother, but I don't understand his need to go about it as he did. It seemed to me that it was just so the story could last a bit longer before a final resolution was reached. The end dragged a bit for me as a result.

This is a book that everyone should have on hand for young princess story enthusiasts. With an excellent main character they can identify with and cheer for it is sure to be enjoyed.

I read an e-galley made available by the publisher via NetGalley. Garden Princess is a available for sale now.

Christina said…
Awwww, too bad. I was really excited there for a moment, but I have enough on my TBR already that I don't need to be adding more books with unfortunate romance. Oh well.
March 20, 2013 at 3:14 PM

Brandy said…
Yep I was disappointed. There are many other MG princess novels out there that do the romance so much better.
March 20, 2013 at 3:17 PM

Charlotte said…
The moment I saw this one my eyes perked up--it sounds like one I'd like! (weather cooperting, I'm going to start getting my own garden ready for spring today...)
March 23, 2013 at 7:16 AM