January 03, 2014
I was utterly enchanted by Lauren Morrill's debut novel, Meant to Be (my thoughts). When the synopsis for her second novel, Being Sloane Jacobs, was released I couldn't wait to get my hands on it. It has such an intriguing concept and I knew that if Morrill brought the same magic she brought to Meant to Be, it would be very good indeed. I was excited when I was approved for the book on NetGalley. It is different from Meant to Be in many ways, but completely enjoyable and excellent in its own right. 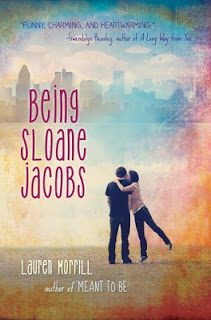 Meet Sloane Emily Jacobs: a seriously stressed-out figure-skater from Washington, D.C., who choked during junior nationals and isn’t sure she’s ready for a comeback. What she does know is that she’d give anything to escape the mass of misery that is her life.Now meet Sloane Devon Jacobs, a spunky ice hockey player from Philly who’s been suspended from her team for too many aggressive hip checks. Her punishment? Hockey camp, now, when she’s playing the worst she’s ever played. If she messes up? Her life will be over.When the two Sloanes meet by chance in Montreal and decide to trade places for the summer, each girl thinks she’s the lucky one: no strangers to judge or laugh at Sloane Emily, no scouts expecting Sloane Devon to be a hero. But it didn’t occur to Sloane E. that while avoiding sequins and axels she might meet a hockey hottie—and Sloane D. never expected to run into a familiar (and very good-looking) face from home. It’s not long before the Sloanes discover that convincing people you’re someone else might be more difficult than being yourself.

The narration switches back and forth between Sloane E. and Sloane D. Due to this and the nature of the story, the set up takes a little longer in this book. I was worried that I would have a difficult time connecting to the characters because of the dual narration (this often doesn't work for me), but in this case I had no trouble. Sloane E. is quietly rebellious, sarcastic, and hiding from some harsh realities she has recently discovered about her father and her family. Discovered in the worst sort of way too. Sloane D. is aggressive, more openly rebellious, and hiding from some harsh realities of her own. Both of their voices ring true and I never, not even in the beginning, had the slightest problem with telling their narrations apart. I enjoyed the supporting characters in each girl's story as well. I like how they both made friends that helped them and had to face challenging personalities they had not encountered before. Both of the girls grew and changed over the course of their story and I really liked how they were not only changed by their different situations but by each other. The most important relationship in this story for me was the one between the girls and I like that they ended with a friendship that never would have occurred under normal circumstances. Both girls have a romantic interest in their stories, but they take a back seat to the story and life the Sloanes. Both boys are pretty great, but I liked that they were sort of on the periphery of what was actually happening.

The plot of Being Sloane Jacobs is brilliant. Who doesn't want to try out someone else's life just once? The Sloanes have the ability to that, but both girls are doing it as an escape from some serious issues they can't handle. There is some rather large wish fulfillment happening in the story. The girls are able to use their new lives to figure out what they want, who they want to be, and how to relate to the other people in their lives. There are consequences and there is some drama as a result of their deception, but Morrill really kept a tight reign on this part of the story. Never did I feel like it was overblown or too much. My only complaint is that both romantic elements seemed a bit tacked on and rushed. I would have been perfectly content if this had just been about the girls.

In a word this book made me happy. It is one of those that you just read and can trust it is going to end well and go along for the wonderful ride. This is the second time I've found this enjoyable experience in a book written by Lauren Morrill and confirms that I will want to read any other book she writes. (The one coming out in 2015 is about a high school band trip! *cue excited squealing*)

I read an e-galley made available via the publisher, Delacorte, on NetGalley. Being Sloane Jacobs is on sale January 7.

Christina said…
Yay! I agree that the plot is brilliant albeit implausible in real life. But who wants real life? Not me. This is why I'm in a book. Haha.

I just learned she has two more deals on the table (well, actually, I think I knew they were coming but not the subjects) and they both sound amazing. Yesssss. Also, high school band trip. That takes me waaaay back.
January 3, 2014 at 10:32 AM

Brandy said…
EXACTLY! And I think she did a good job of making it seem possible even if it wasn't.