Rose and the Lost Princess

March 24, 2014
When I read Rose by Holly Webb late last year, I was instantly captivated by the world and characters. Needless to say I was definitely excited that it was the first in a series and couldn't wait to read the sequel, Rose and the Lost Princess.

This is a review of an ARC received from publisher. 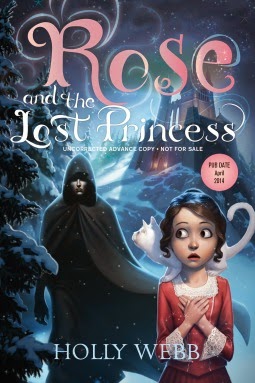 Now an apprentice magician, Rose is asked to help find a very special missing personTurning the worn pages of her spell book, Rose can't believe how much her life has changed. Once a poor orphan, she is now an apprentice to the king's chief magician. But when the country's beloved princess vanishes, everything changes. As rumors of dark magic fly through the city, the king asks Rose for help. She must find the missing princess, before all is lost.

Rose and the Lost Princess picks up almost right where Rose left off. It is a sequel, but it is one of those children's series books that does not require reading the first book to enjoy. There is all the information that you need to know from the first included in the beginning. This made the opening a little slow for me as I had read the first, but I don't remember that ever bothering me as a child reader. As soon as the new mystery central to the plot in this book began, I was sucked into the story and world again. A strange winter is being visited no England, people are increasingly uneasy with their magical brethren, and it looks as if the royal family is  the target of a magical plot. A good portion of the story takes place in the palace as Rose has to help the princesses and keep them safe. It is an interesting and engaging plot and all the key players from the first book are back to assist her. Bella and Freddie play key roles again. And Gus, the magical talking cat, plays the biggest helping role of all. Gus is my favorite character in these books. Not even going to pretend otherwise.

Rose finds herself at a loss as to who she is and what she wants to be as the story opens. She is a hard-working girl and very much wants to earn her own way in life so she is continuing in her role as servant as well as magical apprentice. Her problem is the other servants are less than happy to discover Rose has magic and make her life extremely difficult. She is so sad for so much of the first half of the book. This part of the plot isn't really resolved as she then goes to the palace and gets caught up in her work. I'm sure it will be addressed in other books, but it was interesting to see her struggling and trying to figure out a solution to the problem.

It is clear there is a nemesis on the loose who will make a return in later volumes and there is still the question of who Rose is and where she came from to be answered. In a series like this you will always have questions left unanswered, ready for the next books down the line. Despite knowing that, I felt the ending here was a little abrupt.

Rose and her companions are delightful characters and I love the mix of magic and mystery in these books.

I read an ARC received from the publisher, Sourcebooks, at ALA Midwinter. Rose and the Lost Princes goes on sale in the US on April 1. It is available now in the UK.

Charlotte said…
My kids and I liked the series so much we had to order them all from the UK...we liked the third book, Rose and the Magician's Mask, even more! I hope Rose finds a good US audience, because they are really have such strong kid appeal it would be sad if they went under the radar.
March 24, 2014 at 7:12 PM

Brandy said…
Gus is my favorite cat character of all time. I would read a book just about him-and I don't like animal books.
March 24, 2014 at 8:44 PM