October 24, 2014
Fans of Norse legends and fantasy that incorporates that, Frostborn by Lou Anders, the first book in the Thrones and Bones series, is for you. It is a fun, adventurous MG fantasy with wyverns, frost giants, barrows, and one very large dragon. 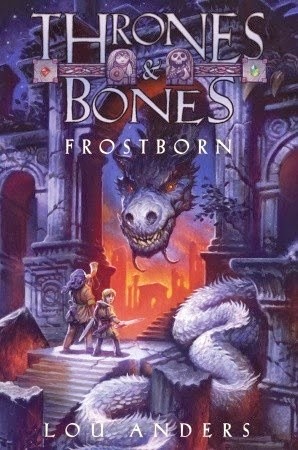 Karn is the youngest child but only son of a hauld. One day all the responsibilities of the family farm will be his to be bear including the bothersome and boring art of trading. All Karn wants to do is work on his Thrones and Bones game, a strategy game similar to chess. He often plays himself working out new and inventive ways to win. Unfortunately, Karn isn't paying enough attention what is going on around him and doesn't realize that real life is a strategy game all its own, where someone has marked him as a pawn to be moved off the board. Tricked into awakening an old dead king trapped in a barrow, Karn is forced to flee for his life into the mountains. Thianna is half human and half frost giant. She is at constant war with herself, discontent with her weaker human half. Growing up on the mountain with her fellow giants, she always felt less than she should be. When Thianna discovers something that belonged to her human mother, she unwittingly draws the attention of teh very villains who sent her mother fleeing into the mountains in the first place. Betrayed by a nemesis, Thianna must flee her home in order to protect it. Karn and Thianna had met and spent time together on a trading mission with their fathers. Fleeing for their lives, they meet up again and join forces to survive and defeat their foes.

Both Karn and Thianna have strong characters and their development happens in a believable and wonderful way. They find the power within themselves they need to do what must be done, coming to terms with the things that were holding them back, and learning so much. This is woven organically into the story of their adventure. I loved their friendship and how it developed over time. This too was realistic. They start out wary of each other, as most children are and break the ice with rough play. Karn and Thianna are different, but respect each other's differences and honor each other's strengths. It's a partnership that works well.

In the course of their adventures Karn and Thianna encounter trolls, a massive city burning (and eating) dragon, and the mysterious wyvern riders who will do anything to capture the object that Thianna holds, not to mentions the draugs (zombie soldiers of barrow king) who are after Karn. These adversaries are a nice balance of funny, frightening, fiercely cruel, and, in the dragon's case, all of these things plus witty and intelligent. It gives the story a nice feeling of peril while balancing that with a lighter tone. There is a lot of fighting and perilous scenes, and the pace is quick. It is hard book to put down and vastly entertaining.

This is a perfect read for young fantasy fans, particularly ones who like fantastical creatures.