August 14, 2015
I have established that I love fairy tales and fairy tale retellings. You know what else I love? Books written by Sarah Prineas. Both her MG series are great favorites of mine. When she happened to mention on Twitter long ago that she was working on a YA, I followed closely eager to read whatever the result was. Ash & Bramble is a fabulous work of genius.

(I consider Sarah a friend as well as an author I love, and she sent me the ARC I'm reviewing here.) 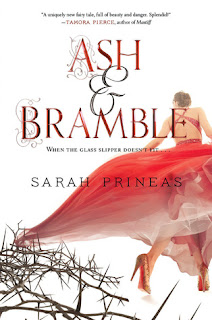 Pin lives in the Godmother's fortress sewing clothes with the other seamstresses tasked with producing the beautiful one of a kind ballgowns the Godmother uses for her mysterious purposes. Pin has no memories of her life prior to the day she begins her work as a slave to the Godmother's will. Everything that came before is a blank nothing. While she has no memories, she is still a person with a will and a fierce defiance to live her own life. She gets a chance to plan an escape when she is used as a foot model for the shoemaker tasked with creating a glass slipper. Shoe has learned his lesson. He knows the cost of disobedience to the Godmother. Yet he still finds himself drawn to the daring seamstress and her plans for escape. But escape is not easy. The Godmother is impossible to outrun. Pin finds herself caught up in a whole new type of prison bound by the power of story and the drive for happily ever after. The more she fights, the more she feels trapped in a life that she doesn't want that leads to a prince, a clock at midnight, and a missing shoe. Her only possible means of escape lie in the devotion of a boy willing to risk himself to break her story and her own determination to decide her own destiny.

Ash & Bramble isn't so much a retelling as a complete shaking up and flipping around of the old fairy tales. And I was not exaggerating when I used the word genius, because much of this novel is dystopian in nature. And what world is better set up to be an actual dystopian hellscape than the world of fairy tales? (Really. Think about it.) While I will never get enough of fairy tales, my patience for dystopia is long gone, but the presentation of it here completely worked for me. I can not stress enough how well the two ideas work together and how brilliantly Prineas wove them into one. It's a commentary and celebration of both while also being an engrossing, moving, and satisfying tale in its own right. I really appreciated the way Prineas used the tropes of both types of stories to twist her own dark tale and highlight the themes.

Pin/Pen (she goes by both names) is a girl who wants to determine her own future, a goal she fiercely holds on to even when she has no sense of her past or even her own self. Her complete loss of memory and history make it difficult to connect with her as a reader at times, but it serves to make her sympathetic. The panic she feels over this is easily experienced by the reader who enters her world as clueless and searching for the familiar as she is. Pin's lack of memory does not leave her an empty vessel for the reader to use as a placeholder. She is very much her own person, which is part of what makes it difficult to get into her head. She is an enigma to both herself and the reader through much of the book. She has a lot of amazing qualities, but a lot of faults as well. Her headstrong stubbornness results in both positive and negative actions and motivations. Even in the end I felt like I was just getting to fully understand who she was, which works well because she is only just figuring that out, and there is still so much she doesn't know. While frustrating at times, it's perfect for the story being told. And I found myself loving her even when I wanted to yell at her about some of the choices she was making. I can see why she does what she does, and a lot of what she does is truly amazing. She has to be a leader and make hard choices that have mixed consequences. She makes mistakes and is not as careful with other people's feelings as she ought to be. She is also a true hero and steadfast friend. She is unlikeable at times (who isn't) and that only serves to make her more real.

The story here belongs just as much to Shoe as it does to Pin. He isn't as forceful as Pin. He isn't as flashily confident as the prince. He has a quiet strength and stubbornness that is just as important though, and it is his determination to see Pin free to make her own decisions that allows her do to the work of freeing herself. But she does the same thing for him too, giving him the courage to embrace freedom in the first place. At times he is hesitant and giving to a fault. They complement each other well. Their relationship develops under incredibly fraught circumstances. I liked the realism in that. Dangerous and stressful events tend to magnify and accelerate the development of feelings and relationships. There are a lot of complications thrown into it too including Pen's role in Story and her relationship with the prince. I know that so many people are going to instantly think "love triangle" and not want anything to do with this. That would be a mistake. Love triangle does not always necessarily equal terrible development. They can be done well, and in this case it is a trope that is fundamentally important to the ideas of choice and happily ever after Prineas is exploring and questioning through her story. The prince, Cor, is a loyal, brave, and dedicated person. He is also smart and able to question the reality of the world around him. He is often a little to oblivious to his privilege and inclined to demand his own way, but he has a good heart. I really loved the interactions between all three of them together too. They are working as adults in their world and in leading a rebellion, but they are also very much teenagers in dealing with their feelings.

The book's numerous secondary characters are all wonderfully rendered as well including the Godmother. I'm going to say little else about that to avoid spoilers, but I loved what Prineas did with her and the fairy tale concept of the Witch. The plot gives a nod to host of tales beyond the obvious reworking of Cinderella and catching them all was part of the fun of reading it.

My favorite part of Ash & Bramble was how it explored the power of ideas, words, and Story. I always love it when books do that and do it well which this one does. I loved the dark twists that took and the ambiguousness of what was right and wrong in some of those cases. It is complicated and a lot of it left open to interpretation with unanswered questions. Yet it also has hope and looks to the future.

Ash & Bramble is everything I want in a fairy tale retelling and in books in general.

I read an ARC received from the author. Ash &Bramble is available for purchase on September 15th.

Kim Aippersbach said…
I have not read the Magic Thief series, though I keep meaning to. I think I'll start with this one, though. What a great idea: the Fairy Godmother as a sweatshop owner! Makes perfect sense!
August 14, 2015 at 2:21 PM

Charlotte said…
so glad I can look forward to this one with even more enthusiasm than I was already!
August 15, 2015 at 5:34 PM

Brandy said…
I was so grateful to get an ARC but I also have it on preorder. With all the other amazing September titles that are coming out.
August 19, 2015 at 12:42 PM