The Land of Forgotten Girls

March 03, 2016
Erin Entrada Kelly's Blackbird Fly was a book I really enjoyed last year. I finished it and knew that I would read whatever Kelly wrote next as soon as I could. I got an ARC of her new book The Land of Forgotten Girls and enjoyed it even more. 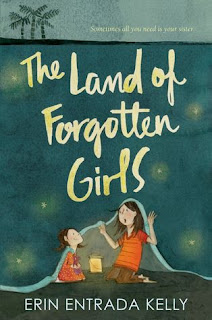 Soledad came to America with her father, sister, and newly acquired stepmom shortly after her mother's death. Soledad knows her stepmom only married her father for his papers bringing them from the Philippines to America. When her father returns to the Philippines for a funeral and never comes back, Sol and her sister are left in the care of their evil stepmother Vea. Sol works hard to protect her younger sister Ming from Vea's anger and bitter resentment. Sol tells her stories the same way their mother used to tell her-stories about a mythical world traveling aunt. Ming now believes that Auntie Jove will be there to rescue them shortly. She is packing and has the date set in her head. Sol struggles with whether she has hurt her sister more than helped her with the stories she tells.

With Soledad, Kelly and her editor have taken a risk that is seldom seen in MG fiction and given us a female main character who is incredibly unlikeable at first encounter. Too often female main characters in MG books have to be the girl strongly suffering injustice in silence. They are the bullied and not the bullies. They are loners who meet a friend who makes them feel special. Not Sol. She is prickly, abrasive, and angry. She has so much anger and it is a beautiful thing. I loved her. Ming is the one who is quiet and hides from the world. Sol attacks it. On behalf of herself and her sister, she is unafraid to face harsh realities. She has a best friend named Manny and the two of them together are not the most pleasant of teams. They steal ice cream from the corner store. They yell insults at the kids at the Catholic school. They throw acorns at one of the students who is albino. But Sol has a deep core of compassion running through her too. When she accidentally injures the girl she is throwing things at, she seeks her out to apologize and they begin a friendship. This was so well done and made sense for both their characters. The evolving relationship between the two and Manny is organic and develops exactly as middle school relationships often do. Sol is also pretty much willing to do anything for her sister and that is another place the book truly excels.

We all know I love a good sibling story, and this is an amazing one. Sol feels responsible for the death of their middle sister who died a year before their mom. Her zeal in standing between Ming and their stepmother is wonderful and heartbreaking. The shifting dynamic between the sisters as Sol tries to protect Ming from the fantasies she herself created and things start to spin out of control is displayed with heart, fairness, and even humor. Into this story, come several other members of the community and through them Kelly highlights how important friendship and community are. I was struck by how real and crucial even the minor characters were to the story being told.

Vea is a pretty terrible stepmom. She is not however painted as a villainous caricature. She is given nuance and I was able to understand her bitterness even as I was appalled at how she took it out on the children. The slow realizations Sol has about her and what she chooses to about those are an amazing demonstration in character growth from the beginning to the end of the story.

I really hope we continue to see books from Kelly. She is a wonderful voice to have in the world of children's literature. Her portrayal of the present day immigration experience is done so well in both of her novels thus far. As a Filipina American who grew up in Louisiana herself, she has the benefit of also being one of the best possible people to tell these stories, and she does it incredibly well.

I read an ARC made available by the publisher, Greenwillow Books, via Edelweiss. The Land of Forgotten Girls is on sale now.

Brenda said…
Interesting that the main character is unlikeable at first, I've seen this in a few of the YA that I've been reading lately. But can't say that I've seen it in MG, but sounds like a great character growth.
March 4, 2016 at 1:55 PM

Brandy said…
It is! And I think boys are allowed to be unlikeable for more than girls are. I really hope to see that changing more.
March 7, 2016 at 9:17 PM