June 15, 2016
Emma Shevah's Dream on Amber was a gem of a book I discovered as a Round One Cybils panelist for MG Realistic fiction last year. It quickly became one of my favorite MG reads of the year. As such, I was excited to get to read her 2016 release, Dara Palmer's Major Drama, early. 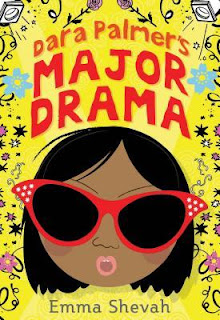 Dara Palmer has one goal in life: She is going to be a famous actress. A superstar. She will live in Hollywood and everyone will know her name. For now, she is a school girl in England who can't seem to get a part in any of the school plays. It is an outrage. She and her best friend are clearly so much more talented than all of the people who are given starring roles. Aren't they? But the drama teacher says Dara needs work and would benefit from her Drama Class. Dara is horrified, but decides to give it a try. This comes at the same time Dara is beginning to think more about her life in Cambodia before her adoption. She notices that there are no famous actresses that look like her. It feels like all her plans are falling apart. She will have to come up with a way to make her dreams come true.

Dara's voice is unique and full of energy. Reading this book is almost exhausting for an introverted person like myself. Shevah did an excellent job of capturing the effervescent, always going, fully engaged with life voice of a dramatic middle grade student. Dara is loud and bright in all of her endeavors. She dresses to fit the part in life she wants to play. She is also incredibly self absorbed and oblivious. The events of the book cause her to open her eyes and start seeing herself and others better. Her conflicted feelings over her adoption and her identity ring true for someone in her situation with her personality. I particularly liked this aspect as we need more books that deal with the feeling of internationally adopted children.

One of the great strengths of Sheva's writing is the way she presents family dynamics. Dara has a wonderful family. Her parents are supportive and understanding. Her older brother Felix is smart and tries to make time for her when she needs it. Her younger sister Georgia (adopted from Russia) is the one member of her family Dara does not get along with. They are completely different people, but as the story progresses, Dara is forced to look at life through her sister's eyes and discovers a lot about both of them. In a lot of ways, the family situation here is very ideal, but it is also realistic. There are squabbles, misunderstandings, and heartache.

I think this will be an enjoyable book for anyone in the target age group. It is written in such a way that the reader falls right into the story. I think most MG readers will feel like they are hearing their own voice or the voice of a friend as they read the prose.

I received an ARC made available by the publisher, Sourcebooks Jabberwocky, via Edelweiss. Dara Palmer's Major Drama is on sale July 5th.
SaveSave