October 31, 2016
Rebel Genius is the first book in a new series by Michael Dante DiMartino. I wanted to read this book as soon as I found about it as DiMartino was one of the co-creators of Avatar: The Last Airbender. I know enough kids still obsessed with that series that I knew being able to book talk this would be important. Even without this I would have been interested though because it sounded like a great story. I was surprised by how much I ended up loving it. (Though I don't know why I was surprised.) 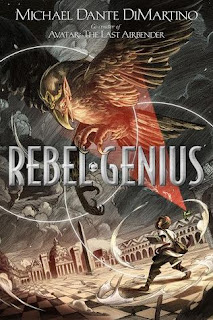 Giacomo lives in the sewers only coming out at night to study a famous fresco and try to learn as much as he can from it to help his own art. One fateful night Giacomo is attacked and in a moment of panic sets off a strange occurrence he cannot explain. He is healed and suddenly in possession of his very own Genius. A genius is a bird type creature that is the living embodiment of an artist's creativity. At twelve Giacomo is supposed to be too old to suddenly have a Genius. They are supposed to arrive when an artist is very young. Now Giacomo must live in fear for his life. Geniuses are forbidden by the ruler of the land who has outlawed all but her own. If any Genius is found, it is captured. Separated from a Genius, an artist loses their mind and becomes a Lost Soul. Less than a day into having a Genius, Giacomo has no idea how he will keep it a secret when he is found by three other children with Geniuses who take him to villa where there is a hidden studio where they learn their art apprenticed to a famous master. Soon after arriving at the villa, it becomes obvious that Giacomo has an extraordinary ability. When word comes that an evil artist is searching for the Sacred Tools so that he can overthrow the kingdom, the four children set out to beat him to it.

There is A LOT going on in this book. A lot. The world DiMartino has created is rich and layered. Based on Renaissance Italy, it is full of opulence, treachery, ruthless tyrants, and dangerous politics. The foundation of all of this is the marriage of art, science, and mathematics. There are a couple of moment that can best be described as "describing a tesseract" moments. The magic well the Geniuses help their artists tap into involves Sacred Geometry. (I know right? GEOMETRY.) But it actually works really well. The moments where things are being explained only make the world building stronger and do not slow down the action of the story at all. It's a fast paced adventure that follows a fairly typical fantasy set up plot wise: orphan finds extraordinary power, gains companions he's wary of, goes on quest, faces treachery, discovers something about himself he never knew. The familiarity of the plot elements do not render them tired or worn out though. They are tired and true because they work so well and DiMartino adds his own twists and flair to the story. The writing is deceptively simple and pulls the reader right into the story.

Just as there is a lot going on, there are also a lot of characters. I was surprised by how attached I was to all of them by the end of the book. There is definitely more character depth that needs to be added to each, but DiMartino does a good job of giving us an introduction to each and providing action that highlights their flaws and strengths. Giacomo is a true hero who is empathetic and feels deeply for every being he comes in contact with. The other children in the book foil Giacomo in various ways. Some of them are developed better than others and their relationships with each other is something that I hope is explored in more depth in future books, but a good foundation for that is laid here. There are several villains to counter the party of heroes, but one thing I really appreciate about all the characters was how the line between the two was not always clear. It wasn't as black and white as that.

DiMartino is exploring some fascinating and relevant themes through the story, political and moral. I'm really looking forward to seeing where he is going with all of this.

The book has internal illustrations that are beautiful. It is fairly long with small print so might appeal more to the upper end of the MG spectrum (which is who it seems intended for). I see this straddling the MG/YA line and appealing to readers in both age brackets. It is a fantastic story to a new series. For fans of DiMartino's previous work on Avatar and anyone who loves complicated fantasy worlds, this is a sure hit.